25 Centuries of stupidity: the definitive experience may be starting thanks to Nexus … 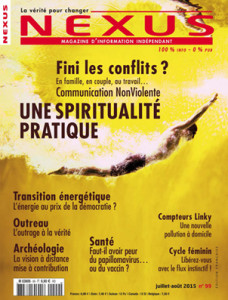 Some time ago, I posted on this blog a call to the people to find guinea pigs for a decisive experience that should show the falsity of the entire scientific paradigm inherited from 25 centuries of accumulation of rubbish, particularly in the West thanks to Aristotle’s skids to which our culture owes unfortunately everything!

I had to this effect sent to Nexus, the French magazine “devoted to science and alternatives”, a small text they’ve just be kind enough to publish to help me find guinea pigs, the ones I’ve had having disappeared over the years long before I thought of that experience. And it turns out that one of their readers has already responded…

If you fit, or know people who fit, the protocol is on this blog, along with details of “A call to the people”, that explains the ins and outs.

To save you browsing throughout all the blog, here’s some information.

From the theory of cosmic cycles common to Hindus and Greeks (and for a good reason), it is the duration of the Iron Age (for the Greeks), the Kali Yuga (for the Hindus), the end of which is taking place right now before our eyes.

This age succeeds the Bronze Age (the Dvapara Yuga). If Internet has understood that the 4 ages had terms proportional to 4, 3, 2 and 1, 1 (so a tenth of the total) corresponding to the Iron Age, they do not seem to have heard of Manvantaras nor Kalpas or Years of Brahma and relate these durations to a Mahâyuga of 4320000 years, instead of the 25000 years of a Manvantara, which would leave 25 centuries only for the kali yuga.

But this passage from Bronze to Iron is characterized, according to the Hindus, by the “revolt of the Kshatryias”, i.e. the revolt of the “rulers”. Originally mankind was considered “consisting of 4 colors,” a reminder of the four rivers of the Hebrew Paradise and the social organization in India reflected these 4 colors by its 4 castes (varna, the word itself meaning color): Brahmins were “trustees” of the “wisdom” and advisors of other castes, the Kshatryias, rulers in charge of maintaining the order, the Vaishas, traders and manufacturers, and the Shudras, producers (farmers and ranchers). This is very nearly the social structure of Western Middle Ages with its clergy, nobility, third estate and serfs.

At the end of the Bronze Age, governments were therefore fed up of being dictated to by the Brahmins and revolted.

The quest for the Universal WISDOM (the Greek Sophia) then gave way to the race for individual POWER and the fights that are naturally associated with it.

Obviously there have been some precursors like Babylon or the Egyptians, but none that did not disappeared rather quickly because the time had not yet come!

But the fun is that it did not happen in India alone with the foundation of Buddhism by a prince (thus a ruler taking the place of a Brahmin!). Which Buddhism has also been rejected from India in less than a century to reappear, thanks to the English, faithful to their vocation of fallen (because revolted against God) angels (angels/angles = same word in Latin) and have been the backbone of the spread of the revolt, first erasing the Celts in the West, settling in Engl-land, then spreading across the rest of the world through their colonial navy.

At the time of the Buddha, the Chinese won Confucius, of whom Lao Tzu (a Brahmin) said that he was not “born to knowledge”, and whose political and social doctrine have been erected as a religion to replace Taoism following the defeat of the Chinese Brahmins.

Also at this time, in the West, Plato passed from being the scribe of Socrates (the wisest man in the world according to the Pythia) to the mentor of Aristotle, the most disastrous of all men, that Plato could not stop dreaming on personal rants and has had time to lay the foundations of the intellectual skid by reversing the direction of ousia and nous, the first word going from Essence to Substance, and the second from the UNIVERSAL Intellect that Christians know as the Holy Spirit, that of the Hindus know as Buddhi, to something strictly PERSONAL AND HUMAN, very close to what we call intelligence today . These two inversions were sufficient to derail everything else. What economy of means! Well done, for an Aristocrat!

So the famous “Experience of 25 skidding centuries” is “simply” to restore the reality of the paradigm of the Bronze Age, which was at the time widely spread across the globe under different doctrinal forms. We’ve also been watered down by the mythology of eternal progress from power thirsty maniacs, so these ancestors must be dumb! As if one could notice anything like a progression in discernment… These Bronze men include the Celts and their Ogmios, the Vedas and their Hindu Vishnu, the Tao-te King and its Chinese Tao… three different names of the same Verb on which St. John will base his Gospel. Amusing detail, the name of this Verb is the same in Greek logos, and Chinese, log.

Less funny a detail: with the rebellion for power, the Verb has disappeared from the intellectual horizon of human beings of which Logic is nevertheless the name…

And for which use?

None of course, if one believes that only the weather forecast and silly micro emissions between TV news at 8 pm and the evening program at 9 pm, are interesting human beings today.

But I am signing up pretentiously along the line of Little Therese, and so I am not telling you all this to convince you, I leave that to the Holy Spirit, but because I have to tell you, since nobody does!

If this experiment works, (and, if it fails, it can only come from my pretentious claim to believe having found the trick), it will make it clear that everything the planet believes today is a tissue of stupidities. It is also necessary someone out there sees that evidence, and I know many other scientific evidences that no one has seen.

One of the latest of which (latest for me) regards the electric current, considered as a flow of electrons, but which is stopped by vacuum while electrons moved with enthusiasm and happiness in our old CRT TVs…

But I have detailed many other scientists scams in my “Let’s be Logical: a name of God)” for which I was lucky not to receive any refutations yet…

Casting a glance at my protocol, you will see that it does not require particle accelerators or telescopes in artificial satellites, just an individual as I had the chance to meet some and who had the chance not to know me after the idea of the experiment came to me!

If this protocol does not require any special equipment, it requires however people with special abilities, and I expect that a large army of malignant will refute it taking their argument from their flawed paradigm. Do you know that hospitals use “fire cutters” healers, including to limit burns consequent to radiation therapy: do not insist to stay the last moron!

You should also keep you updated. According to Internet that believes it knows all, 10% of the people are casually coming out of their bodies (OBE), and near death experiences (NDEs) are too numerous and converging to just accuse their participants to be liars from the top of failures to conceive anything “outside the box”. Obviously the 10% of space travelers are not those I seek, because I ALSO need them to be aware of their environment AND to know how to locate themselves where they are asked to, and that is why I am also looking for people who see with their eyes closed, because in this case, most of the time, everybody knows from where they “look”.

Those I have known and who could do that would not read the newspapers, as for them, they only told nonsense, and they were not trusting scientists either because they constantly lived experiences which these geniuses did not understand or even believe possible. Which gives me some reasons to believe that discovering such a guinea pig through the press or some kind of social networks must need a little miracle, but is that a reason not to try?

Especially if it succeeds and someone is able to take it into account, it will only be a second miracle, after all!!!

But what would I not do to spend my time without playing on a console?