Missed about cancer and Traditional Chinese allopathy on alternativesante.fr 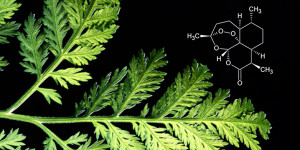 Go quickly on http://www.alternativesante.fr/cancer/l-artemisia-annua-contre-le-palu-et-le-cancer. Fortunately I have friends to warn me… You will know everything (almost) on Artemisia Annua, an aromatic plant that has been used for ages by Chinese medicine. Obviously, they have isolated the active ingredient they called artemisinin, which has just become an important part of your medical culture!

It’s my nasty side: why 2% remain who did not want to die in the first 16 hours? And will they die one day or will they reseed the cancer so that a second dose will not kill as many…

The artemisia annua, as you know is NOT the “vulgar” wormwood also full of artemisinin and some of these sagebrush varieties are highly toxic. So beware!

Furthermore, the plant should be associated with iron, thus bioavailable, not filings or rust, and recommendations cover Feralim from Lorica, or iron from Ferryon Catalyons, or ferrous bisglycinate.

But the document referenced is great fun: it gives all the tricks to grow your artemisia by yourself and even gives addresses to obtain seeds. This is € 4.25 for 50! Fortunately social security does not know how cheap it is!

On the same document you will find a bunch of questions from readers to which Alexander I. responded cautiously. Even requesting an anonymous, but pervasive, reader to identify himself and who ends up doing it!

Of course all this is extremely scientific. Demonstration: “Artemisinin stops the ‘E2F1’ transcription factor and is involved in the destruction of lung cancer cells, which means it has a transcription meaning that artemisinin controls the growth of cancer cells”!

And since it is scientific, we are entitled to the inevitable statistics that we will have to interpret, noting that they are obtained in vitro: 75% in 8 hours and “almost 100%” in 24 hours! If boiled, cancer cells are 100% dying much faster!

Introduced as after traditional Chinese medicine, the discovery of its effectiveness, from malaria, was from a “secret” program initiated by Mao in 67 (so it´s not very traditional!) Although it appears that the Qinghao (Chinese name) was known for its effectiveness in relapsing fever.

Youyou Tu (sorry, no pun!), the pharmacist in charge of the study eventually found in 71 how to deal with mice and monkeys with a “92% efficiency”! Then she said that 21 human malarial patients were “90% cured” (whatever that means…)

It was only in 2011 that WHO recommended artesunate for severe malaria in children.

Traditional Chinese medicine involves many specialties characterized by their type of therapeutic process (not by the organs targeted, like our Western specialties) the best known being acupuncture. The “use of poisons”, which would correspond to our allopathy concerned doctors being Taoist initiates of high grades, which does not seem to be the case of Youyou since she must resort to experiments.

As for acupuncture, westernization of traditional Chinese medicine or Hindu Ayurvedic medicine, comes down to “kitchen recipes” that are accidentally found to give statistical results since the knowledge of their functioning has been lost. Which brings us to the same methods as our common medics.

We are therefore faced to play Russian roulette as usual, even if from Chinese traditional. And as we do not apparently have enough perspective to certify the absence of side effects, I am not more inclined to suggest you jump on artemisinin as on any other funfair miracles. Especially since I see from the mails of readers, while the effectiveness has only been “demonstrated” in cases of lung cancer, patients sick from other cancers tend to want to use it! Despair is driving to many odd things.

One of the most amazing haul comes from a smoker who asked whether artemisinin treatments may allow him to continue to kill himself with his cigarettes!

The requirements have all the seriousness of allopathy: 500 mg to 1 g daily for three weeks for a cure and another after a week off, then look at what happened! But we learn also somewhere else that the artemisinin cure must be preceded by an iron grip for a week and it may take several months with breaks of one week each month during which you fill yourself up with vitamin C, all this without knowing whom it is aimed at…

Anyway, as your doctor has never heard of it and as the advice of your supplements seller are not more documented, you are reduced to the usual method Coué! Sorry! The “placebo effect”! Or to your next-door neighbor for whom it was successful…

We have no signs yet of accidents as a result of artemisinin treatments, so either there was none or no one warned us: You’re still in the running to be the first to reflect a glitch (anyway avoid to die without having had time to warn, please).

Me too, I would like that artemisinin is the miracle that we are all waiting for, to let us continue to smoke and to eat anything rubbish without risking a cancer, but I prefer to stick to my form of “precautionary principle” by staying to this information from Hippocrates: “Your food is your best medicine”, which starts from a base that seems reasonable: that our bodies are made of what has been eaten, and that there’s probably only what we ought to be careful of.

And this is traditional Greek medicine!

Which proves that 25 centuries ago the West was not so moronic as today.

Anyway, Alternative Santé spoke again about something important that your tabloids have missed, and that’s why I relay it!