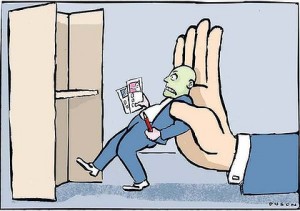 The President of the National Assembly, Claude Bartolone, in a report delivered by hand to the President of the Republic, on Wednesday, April 15, 2015, proposes to fight against this endemic abstention with mandatory voting! An initiative very much noticed by the press, apparently also in disarray by this new threat of despotism…

Abstainers are NOT LAZY…

There is not (yet) 50% unemployment in France, so at least three quarters of the voters have a job and they get up every morning to go to work.

They are only the guys and girls that YOU DO NOT INTEREST AT ALL!

Besides, you must know it, if not, you would not be so scared!

Except that the people (supposed to be the governing power in a democracy!) has more reason to fear you than the opposite!

Voters choose to vote AGAINST much more than voting for!

This is the magic of the double ballot. Those who go to the second round and had voted for a candidate who had been defeated at the first pick generally vote against the one they wanted to avoid at all costs, from the beginning.

This is also how we ended up with Holland to avoid Sarko, as you well know…

IN FRANCE, DEMOCRACY IS A SCAM!

Abstention is the ONLY way the people have to express his disagreement with the applicants. Only what percentage of abstention does it take for the silent voice of abstainers gives power to the people… 50% is clearly not enough!

The mathematicians have invented the empty set, then why don’t we question the nonsense according to which “silence implies consent!”? If a set (presumably formed of elements) may be empty (no element but still a set?), why should silence be an approbation?

The problem is that idiots are not simply “funny” they are especially dangerous! See “the killers of the Republic” by Vincent Nouzille, which I have already spoken of!

Or the remarks that I have had the opportunity to make about the paranoia that drives someone to bid for the top job, which Nouzille documents perfectly!

I know you did not vote for the government: it was imposed on us by an omniscient president who was foisted a blank check! But as you can see (I mean, when you really see them, because the amphitheater often looks empty: Members must have a special regime of paid vacations)! I repeat, when we do see our little puppets ecstatic applause standing and unanimously on Valls babbling, the appointed Gnafron, (a famous puppet) we are forced to believe to be at the Grand Guignol!

But those puppets are our elected officials. With such a public, governments would be wrong not to take it for a bunch of knuckleheads…

What do you say? There is no one left? Do you know who you’re kidding? Yes! Ah, that’s a shame…

The proportion of politicians with lawsuits buttocks to them or their families is probably higher than that of the general population, yet them, they have the means to cheat and pass through the yoke of the law. For example if your lawyer suggests that a “free” prostitute is only a libertine…

In other words, the real solution would be politicians should abstain from stand!!!

But how can you do with people who have chosen to be parasites by vocation?

Once considered all the possibilities, the solution is obviously the simplest hypothesis as Occam said. Except that the divine Occam had not considered that this solution itself is impossible!

So obviously it’s boring! But for this beard, even William’s famous razor is powerless… since the death penalty was abolished! (Besides, we never cut throats with a razor since our tolerant Republic had its tool for that … before dropping it…).