Nicolas Canteloup finally invented a safe vaccine against the flu! 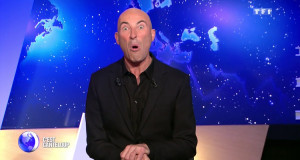 Ah! You should have seen it on October 15!

I will try to tell you it (from memory, the replay is too slow on my country system!). The pretext was that the flu had hit last year more than usual! Canteloup imitates Michel Cymes:

Note for foreigners: Nicolas Canteloup and his accomplice Nikos Aliagas are a duo of standing jokers who run a show every evening on the TF1 network. And Cymes is a doctor on network 5.

So Canteloup passed on to his friend Nikos a ring to protect him this winter! Explaining:

“If you spend the winter without flu, what will you say?”

“The ring protected me…”

“And if you die of flu what will you say?”

A million dollars sitting in Canada …

I do not know if it’s still valid, but fifty years ago, there was a million dollars waiting for anyone who could prove that a vaccine has prevented any disease!

Reread that last sentence carefully, and you will see that the one who made the offer had absolutely no risk of losing his loot!

No one has ever been, nor will ever prove such a thing! And it is on that joke that Jenner and Pasteur’s heirs count to continue to fool us.

However, we have all the evidence to the contrary. This means that people have had the disease against which they were vaccinated or another illness’ typical accident for the vaccine they had been given. As meningitis due to BCG in Japan…

But I’m not going to make the speech, I’m just trying to send you on www.infovaccin.fr/, the site of the “National League For Freedom of Vaccinations” which I mentioned to you several times, especially on the occasion of a lawsuit won against the US where the administration was ordered to pay 61 million dollars to the family of a little victim, which they hope will cover medical expenses.

The problem of the League is not to take sides for or against the vaccine itself but to warn that ignorant politicians indulge the right to impose a medical technology that is challenged by the medical profession itself, in reality no less ignorant. And this little irresponsible herd embarks on funfair medicine, that is to say without diagnostic to indicate a useful treatment, unless groups of ages are diagnostics or diseases!

Note that, doing so, the politicians are not guilty of doing an illegal practice of medicine, since although they are not enrolled in the Order established by Petain, they do not make predictions or diagnoses, and this third point indicates that this is not their case, yet they announce a prognosis: we will not have the disease for which the vaccine is designed!

And I continue to push for the book of Mark Menant “Medicine, diets: the terrifying deception” because it can vaccinate you against the ecstasy you might have for Louis Pasteur! While the first half of the book is spent on this, and it is breathtaking! Not only Pasteur was not a doctor, though this has never prevented anyone to heal his contemporaries, while some owners of diplomas do considerable damage… but he has crooked or defrauded everyone he has met! I had already read a lot of stuff about Pasteur but never in such detail.

A must read before believing you act responsibly when vaccinating your next blond head.

But also, ask yourself questions. For example the argument morons use to impose it on everyone: they say that if the entire population is not vaccinated, those who are not pose threats to those who are! So vaccinated people also are at risk!

But ho! Elite ! When will you stop your bullshit? When you cannot take us for idiots anymore? It is true that it may take some time…

If you want to discover other nonsense that you have swallowed at school, here is one of my books I advise you: “Let’s be Logic!… for God’s sake!”. To the glory of Descartes, Aristotle, Newton, Einstein, Darwin, Wundt, Pavlov, and even Cantor and Gallois. The second part is dedicated to those who allowed the slippage of the guys from the previous list. It is an incentive not to make you believe inconsistent theories by giving you the means for it…

Forget the flu vaccine: take bags of Magnesium chloride instead!

I have contributed for over 50 years to the social security, so I want to save them unnecessary expenses: it will be a gift for our little ones…

If you really want to avoid the flu this winter, and since the winter seems to rush, take a magnesium chloride cure. If you do not like the taste, try to stuff you with 100% dark chocolate, but it’s steep too… Otherwise do not breathe while drinking.

But chloride does not only protect from the flu. As industrial agriculture has dramatically made the soil deficient in magnesium, you can be pretty sure (I love that phrase!) you lack magnesium, which makes, thanks to Liebig, chloride sound like a panacea and you’ve already had a bunch of diseases that were due to that deficit and which gave you the opportunity to intoxicate you with various medications.

Professor Delbet became (moderately) famous for using it to heal polio victims (moderately because what it did not stop others from trying to make more money by inventing vaccines, including Professor Lepine (from Institut Pasteur) who himself wrote that they were all ineffective and dangerous… before making his own (labs are there to make you sick and make you pay for it…)!

Otherwise you can buy it at € 10 per kilogram, but you will have to weigh the 20 g doses!

At worst, if you fire a diarrhea, decrease doses or stagger your glasses.

If you really want to know if you need it, since chloride protects particularly from infectious diseases, use Vincent’s Bio-Electronic (www.votre-sante-naturelle.fr/), and while going to your pharmacist, buy a “pH paper”. If your saliva is above 7, please do it… There, I simplify somewhat the findings of Louis-Claude Vincent, but I looked for chemical hackers who allegedly found cheap tricks to measure rH2 (-log (H2)) or redox, and so far I have found nothing. If you have more luck, thank you for telling me. If it is for the redox you have found as Vincent uses the rH2, which is independent of pH, here is the Nernst equation: E = volts (rH2-2pH) x30!

Anyway if your pH exceeds 8, it is urgent to do something, or too late…

If your rH2, assuming you can know it, exceeds 28, it is time to take antioxidants… the map of pathologies depending on the pH and rH2 are on the BEV site that I just mentioned…

Nevertheless there is a final parameter noticed by Vincent which is the resistivity. The “thing” that opposes the flow of electric current, or in a human body (but others also) confines electronic (chemical) disturbances to limited areas. It is therefore important that it is the highest possible if you do not want to get sepsis every time you get a scratch. Why is the quality of your drinking water that counts, and it should be the least mineralized possible or just spring water. If you only drink cognac, it is not that which will monitor your resistivity…

And to end your hunger…

But there is still cheaper than all this: Before each winter (in fact it’s better in the spring, but it’s a little late for this year…)! Go on a fast! You’ll give peace to your body, which will then be able to attend to repair the abuse you subject it to constantly. For two to three days, it will request you to eat at meal times because it has that habit: but it’s not hunger: it’s only appetite. Hunger, you will know it after three weeks or so, when your tongue will discharge and your fasting breath will become clear. And at that time, it is better to eat again. Contrary to urban legend that we should start gradually because your body has just turned back to that of a little baby… which the legendary broadcasters have never checked (and rightly!). You can restart “normally”, which does not mean eating junk food like canker, but to take the opportunity to put yourself on a variation of the Cretan diet, i.e. “normally”. And while the diet: spring water! Most counter-indication are obesity or excessive overweight simply because during the early days, all the drugs contained in your interstitial fat will pass into the blood, and it will not be very pleasant, and if the excess weight and drugs is really enough, that same may kill you. If you are in this case, fast one day a week until these days of fasting are not unpleasant any more. If someone is very thin, however, his body has problems of assimilation, and it’s a good idea for him to fast. Putting his body to rest will allow it to readjust his feedbacks, and it will begin to gain weight when starting to eat again. I have witnessed it!

By the way: Canteloup/Cymes they never said that the ring was a new vaccine against the flu, even if they have left Nikos think he could die!