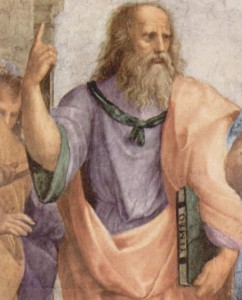 We will talk again about the source of thoughts in some detail. It will allow us to see in the number 11 the strange source that our Dr Rober Anthony believes he found before our birth… But first let’s deal with a source that cannot bear so much doubt and about which we can be inspired by the Old Testament and Plato. It will be an opportunity to test your culture, but do not be afraid, it does not require you to have been to MIT!

The crucial question: what are two and three making?

It depends on what you want to speak of, like a general semantician would put it. It can make 23, or 32, if we do not take care about the order.

So, drop general semantics and its pathetic word games because we do not play in their backyard, and because I guess you knew that 2 and 3 make 5! Or two and three make five! Because, how we write 2, 3 and 5 is only a way of writing. And using the digits or the alphabet gives you two choices.

We saw that God, our choosing function, should choose in what order to ask His Verb to express the possibilities from The Principle.

We are using enough words to give these explanations to know that the existence of words corresponds also to a possibility. Would there then be words to differentiate our considerations as we make them? Of course there are! Successive considerations is about enumerating and the names that we will give this inheritance are simply the names of numbers. We only talk of integers for now (that is to say not “cuttable” what physicists would love their “atoms” to be, according to the name they give to them), since we cannot make bits of consideration, i.e. considering “just a little”!

If I told you that you can consider punching out one of your eyes with a stapler, do you think this is a universal thought shared among the 7 billion and some consciousnesses of today? Probably not, since you have probably not already made it yours. But the story of two plus three that are worth five, do not depend on who told it to you. Obviously, it’s depending of the language. In French they would say “deux plus trois font cinq”, but you know that these six names of numbers are translations of each other. And you suspect that since the dawn of time, all human beings were able to verify the same using various names.

Knowing who you can count on…

This is where Plato can guide us. He calls these universal entities: “divine ideas”. But they are not more “manifested” (feelable) than our three Trinitarian “functions”, although they are not any of the three. And the consistency of their properties in addition or multiplication operations are perfectly understandable for us: 2+3, is also 3+2, in the same way that 2×3 which is 6 is also 3×2! In other words, we can perfectly copy the ideas of God and find that their properties are inherited by their copies … And we can do so without anyone trying to influence us with his personal opinion! Which was the case of all mathematical entities, at the time of Plato at least, for mathematicians have recently started to play (cheat) with words and try to convince us of their versions of mathematics, and that’s why we need teachers now!

These numbers have interesting features, as this same “one” was used by God to order His Word to make us exist: we are “one” consciousness, the first consideration we can ever make! And as we can consider what we wish to, we’ll reuse our freedom to consider things either in bulk or individually as we did for The Principle. In bulk, numbers are called the quantity (the amount)! Individually they are also the expression of the distinction, since between two numbers there is always at least one consideration, i.e. they ALL are different. This also shows that the possibilities of The Principle are possibly all different. While being all different, numbers share special features from the single possibility or counting (the amount again). Our possibilities of existence make us be different human beings, but all of us are consciences and it is God who chooses the various possibilities of human beings to be manifested through His Word in order for them to be compatible at a given time.

For the Greeks, mathematics is “teaching by Reminiscence”. Reminiscence being the remembrance of the ideas of God that we have known, even before we incarnate. But as we do not need to have special things to consider, to make considerations of what we wish, we could count, even before our birth. Simply, with no formal language, we could not give names to numbers, any more than to all that we could consider in this state of pre-birth.

Are these “ideas of God” the expression of the possibilities that have allowed Him to manifest the rest of the world? For our Plato: “God always geometrizes!”! But also, according to the Book of Wisdom in the Old Testament: “Everything was done according to weight, measurements and numbers”!

We don’t play any more now, it’s becoming heavy, we have to “report”!

Ooh! Where are these weights and measures coming from? Geometry, precisely! The science that studies the Earth, our support. That is: an aspect of Nature. And measures are a way to use numbers by choosing a unit in the “grandeur” that we want to study and by counting units that are contained in what we want to measure. As we heard in school, before the “metric system” men have used many other units, and some still are. And more generally, as we cannot always find a “whole” number of units in what we measure, a measure will be a ratio between what is measured and a stallion.

In other words, measure should be considered an extension of our integer numbers as we called them (an indivisible amount of indivisible units) to consider making “reports”. We know that some reports (ratios) like 4/2 or 12/3 are “equal to integers”, since we can count 2 times 2 to get 4, and 3 times 4 to get 12! But some ratios do not lead to integers. For example, the famous 22/7, that the Greeks (and others) used to approximate the ratio of the circumference of a circle to its diameter, is between 3, because 21 is 3 times 7, and 4, because 28 is 4 times 7. In other words, 21/7 is smaller than 22/7 himself smaller than 28/7 and the ratios are in the same order as the corresponding integers of their numerators. Also note that these ratios are not really numbers, that is to say they are not characterized by their differences, because they may have identical “values”. We usually say that they are “equal”. For example 4/2 and 6/3 are said to be equal together and to 2. The correct formulation would be to say that the three expressions have the same unique value “2”. But for modern mathematicians ratios are now “rational numbers”! Plato is far away … And God can be forgotten with his “ideas”!

And weights? It makes more to think of physics, but the idea of weighting is not necessarily associated with the weighing of goods… In fact the ratios we are already talking of are “weights” as the Greeks are going to use in geometry under the aspect of “proportions”.

And we are still purely in the ideas of God, but expressed not manifested, expressed since we can access them, and not manifested because we can no more be aware of an arithmetic number (when you count on your fingers, it is the fingers that you see, “seeing” numbers, would be being aware of our successive considerations), or aware of a geometric plane (without thickness… so not very “material”), obviously not to be perceived either with the perception channels of our body or our mind.

But we can do all arithmetic operations that we want and all geometrical demonstrations also, often thought to be based on abstract concepts, but which are universal in fact, the mark of the divine or the spiritual.

Here we have the ideas of God which He uses to manifest the world, and we noted that these “ideas” include the notion of proportion, which will result in harmony, another “choice” again. In the field of geometry, considering the shapes of nature, many are built on the Golden Ratio, a proportion that is found naturally in pentagons, which is ubiquitous in the plant world and the basis of the DNA helix.

The musical harmony that Plato associated with cosmic beings (the Music of the Spheres) expresses its harmony, by ratios of integers such as 2/1 (the octave interval) a doubling of the frequency of the note or the playing of half of the string. 3/2 in turn is the fifth interval, 4/3 the fourth and the third is 5/4. The Golden Ratio cannot be expressed by a ratio of integers because geometry likes to have fun with “square roots”, if only for the diagonal of a simple square. And the value of that number, related to the pentagon, is calculated by (1+root(5))/2.

God’s chosen possibilities of expressing our consciousness, which we call our existence, is evidently expressed in the same spiritual realm, allowing us this familiarity with other ideas of Him, but our access to the possibilities of The Principle itself goes through the ideas God “spoke” through His Word Who expressed them on the mathematical level.