Temperature 49.3 °C this is a fever, they are snotty, they have the flu! Are they contagious! 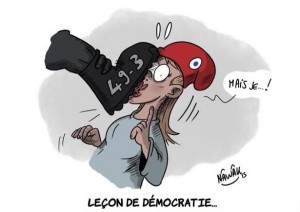 No, but! Where does daddy Valls believe is? Where did he see, they had “succeeded” in anything to help national security with his Holland, and could take advantage of this “result” to care for the economy with their Macron? When will we send these kids back to their kindergarten or Medical Pedagogical Institute. We’ll see if these zombies are contagious at the time of the next election! But for now they think they have arrived, while they are not even out of their coats … Maybe they are not even able to go further…

49.3 is the reference of a French legal trick to bypass the votes or representatives when this vote is at risk. It’s mostly used by leftists here.

TVs did not refrain of reminding the time when Holland reacting against Villepin said 49.3 was a denial of democracy and uses it less than ten years later!

It’s scary silliness! Valls did not even notice his great demonstration of inefficiency during his visit in Marseille: “There was a time, not long ago, it would have taken days for the police to intervene.” Did he brag, while residents testified not to have noticed any difference in their safety… (A gang fight opened right when Valls arrived in Marseilles!)

For those who would believe that we have hit the bottom, I reassure them: it’s been 25 centuries we have that impression. For details I refer to my book “Let’s be logical!”.

It takes imagination to stop the bullshit. As the idiots do not, it means that bullshit has its own life, it develops as a hopelessly on its own. So it would be better that those who have enouph imagination use it to devise solutions to stem what appears as a contagion! Although physiological contagions and epidemics eventually stop, with or without treatment. So stupidity is not “natural”, it is necessary to maintain it, to feed it, to pamper and be proud of it to guarantee its survival!

So who is responsible? Even if I paraphrase, these are not the idiots themselves, it is those who do nothing against it… and who are content to follow the movement! As pooches who wanted to show that they were Charlie… Or those who elected a newborn as President of the Republic who has been recruiting for three years his maternity buddies. And those who were 20% more to find that he was good. The 10% who have since realized their mistake are just a small hope that it can be stopped, because there is a safe bet that they did so just because the various economic constraints regained on the alleged tributes to the victims of the abuse of freedom of expression: The pressure of the wallet is stronger than the incentive to crocodile tears.

The savior of the West soon in uneployment!

But he did better, with Merkel, he brought peace to Ukraine! We he said! So luckily he was there to stop Putin playing the ass. Finally, this is what he believed with his good naively hopeless faith, except that nothing stopped on Sunday! The « savior » of the West, and now of the world (he did not want us to believe that it was thanks to him that Obama had made peace with Cuba?), who has already failed to stop unemployment, still just succeeded in not keeping a promise he had forgotten to make…

It’s been 25 centuries, as I said, that “authorities” of this planet no longer serve us as wisdom guides, but are more interested by the “power” and are, at best, liars, crooks often, and at worst serial killers (see my article on “freedom”). Whether such authorities be political, scientific, philosophical or religious, their only ability is to manipulate people with means which have not changed much since the beginning, although now they are trying to adapt to new technologies.

And as long as said people will not understand the methods by which they build morons, nothing will be able to change out of an acceleration of the fall. Again take a look at “Let’s be logical! … By God’s name!”.