The Christmas Championship of ridicule has started, who will win: the Regional elections or the COP? 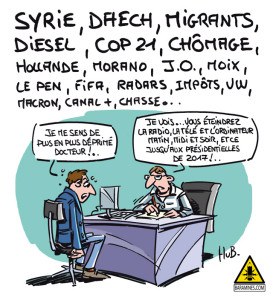 Jubilant! After last Sunday’s tsunami, we can see the journalists on TV finally tell the politicos they are dumb, after having agreed to be their doggies and their stooges for at least 50 years! A relief!

The failure of Sarko to be a bulwark against the FN, means he will obviously be questioned after the second round, and right now he is not worth the indulgence of his interviewers.

A question to our President-Inseminator: “Does Sunday’s rout involve a kind of coitus interruptus unworthy of you? In fact, you are reduced to jerk…?”

Why be so afraid of the FN?

Are they afraid that the FN shows them that it can be faster than them to screw up the country because it took 70 years to get where we are? In other words, since we voted for them all this time, is it that we are suicidal and desire that France blows up in the air? And they are scared that electing the FN would end their jobs!

Clearly, candidates are especially afraid of being unemployed as unemployment continues to gallop, since they know nothing but flattering or threatening speeches to lure their victims and beg them to vote for them. And nobody will hire them.

In fact, beg just to vote at all! Because for now the party of non-voters is before the new “First Party of France”!

Did they notice that the temperature in Paris is NOW 6 to 8 degrees ABOVE “normal season” temperatures?

Well, all these countries are not democracies, but how long will the peoples from these democracies vote for these clowns?

Or how long will we suffer the awesome “scientific” calculating their “normal values” over 30 years, of which no one knows. Because if it is computed on the last 30 years, their “normal” already takes into account the warming and are already too high, in any case “false”! And where are the indications suggesting that this warming is linear and predictable?

Whether French politics or the global management of “Partners”, the only appropriate word is “grotesque”!

The choice of the word “Partners” itself should have made us think. Criminal gangs, are also “partners”: the word does not define a target!

Obviously the temperature does not care about the 25 years forecast of meteorologists, who even yet are often not able to make a damn good forecast for tomorrow morning.

It was obvious that the politicos are miserable and pitiable since the French Revolution, and we continue to believe that by voting, we do our “civic duty” to elect people who have proven they will not do their “elected duty”!

Our famous motto was launched around 1781 by Amschel Bauer who had tested it among intellectual elites of his time and ensures us that the most intelligent had not realized that every word of it was inconsistent with the other two, and that in the name of Equality alone, “the son would kill the father”. Which Marx’s ideology put into practice well before Isis.

The Bauer in question was the founder of the Rothschild House and his presentation was made at his home in Jüdenstraße in Frankfurt. Then the motto “Liberty, Equality, Fraternity” was published in an antimasonic journal before being recovered by the masons and becoming the motto of the republic.

Have we heard enough over last month, of the famous and appetizing motto! Only Marine, to my knowledge has completed it with the word secularism.

I’m not mad crush for the catholic, but the reference to the secular religion does not make me think that we take a risk of disruption in voting FN: they are exactly like their opponents! I note in any case from that formula of the FN (Marine version), France is no longer the eldest daughter of the Church… This atheist secular religion, is a hypocritical doctrine that claims to be based on “tolerance” to other religions … provided they remain hidden. The word “tolerance” is well worth its three accomplices of the national motto. When we tolerate someone it means that we consider him wrong and we do not want him to bother us in exchange for the fact that we promise not to bother him either… It’s very far from being a virtue! In mechanics, tolerance is the acceptance of the inevitable error of the machining processes. In other words, it is the limitation of the tolerance that makes things work. Fortunately our motto assures us of Freedom. So our tolerance must be total! And so must be the mess!

The bases of Republican alleged values upheld by a bunch of crooks are no better than those used for climate forecasts developed by a bunch of sick from down syndrome.

LR, PS, FN: BROTHERS because of fraternity, and ENEMIES for conflict of interest!

Pitiful sight! Yesterday’s enemies sacrifice themselves to face a new enemy, and they will come back to us after to talk about their “unshakable” beliefs!

And next Sunday some convinced left-wing voters will vote on the right, while no less convinced right voters will expect that many of them will sacrifice their convictions to vote left so that they are not the only traitors to their cause.

Because, oddly, the beliefs with which they have fed us for some centuries, are weaker than the protection of their wages threatened by the family of a Breton-cacique, which not long ago had less bitchy and electioneering speeches as opposed to the rule of the game of his adversaries, and which people loves, it seems.

Abstainers, be ashamed, because politicos, themselves, cannot be ashamed!

Since my majority, i.e. long ago, I dream of an election where voters would show their deep convictions, namely their fed-up and let their candidates go to the polls alone. Only Pavlovian manipulations are far too well and powerful so that we cannot escape feeling guilty to abstain.

See ALL the candidates for the second round hoping to convince voters to vote. BECAUSE THEY KNOW THAT YOU CAN NOT BE CONVINCED TO REFRAIN: your skull has been overflowing with your civic duty!

The “Republic” has defined human rights, and that’s a whole novel… But not a word about human duties, other than simply voting to enjoy exercising our “right to vote” nobly given to us by someone more equal than us!

This means that no politician has the duty to be Honest, Sincere, Intelligent! Was it deliberate or merely prescience?

The parallel between the situation of the climate and the world politics who believes to be able to take care of it, is quite striking. The enemy is the FN (of which, basically, we do not know much about its ability to manage, while those of its enemies are inescapable), and the other enemy is the “greenhouse gases” we do not know much about either! For pollution, the images from Beijing show it is enough to put a piece of paper over one´s nose, which will not disorient the “veiled” Muslims (which are not yet covered by our republican fraternity), on the other side, to remove the FN, it is enough that everyone, including those who do not want to vote, go vote for one of the other gangs.

I have already said in a previous post or two, it’s not the bullshit of politicians which drives me to despair, because they are not so many, it’s the amount of “normal” people who still believe them against all the evidence. Interviews of passers-by on television does not comfort me more than that! Because their fed-up is not yet motivating them enough to express it.

I have nothing against voting! I just need to have someone who makes me want to vote for him. I am ready to give my vote to someone who gives me his word back… and whom I can trust. And do not give me names, I do not want to get sad…