The last NEXUS of the year, an excellent vintage again! 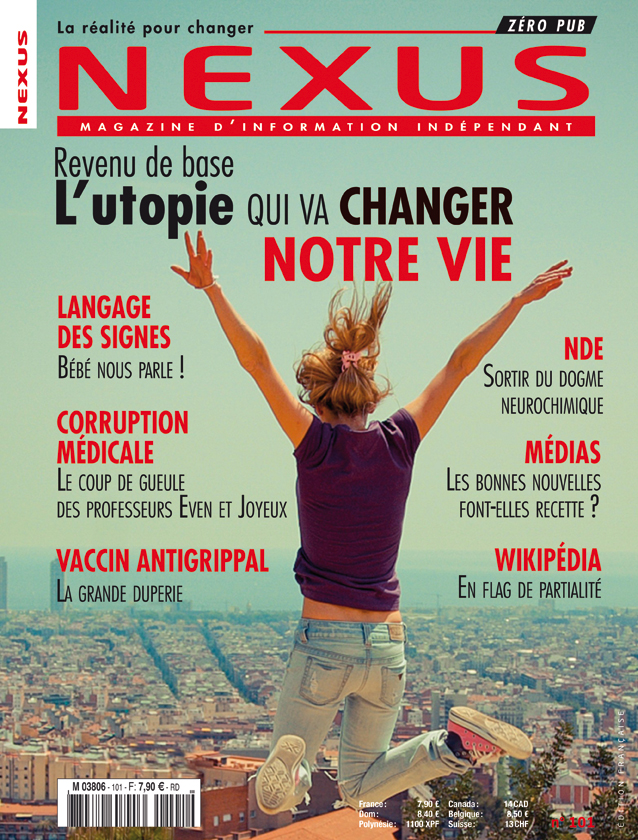 For Yanks, 101 indicates a “quick but fundamental introduction to a topic”! It is also the “Royal Road” (El Camino Real) in California: What if this issue 101 was your introduction to NEXUS?

Your favorite magazine (or will soon become) has been a victim of the totalitarianism of politicians who play doctors!

It is a discreet footnote that tells that there are real risks to be an independent newspaper!!!:

“In 2006 following the publication of several articles in the issues 37-43 questioning vaccine safety, NEXUS was sentenced to four years without a joint commission and a VAT at 20% instead of 2.1% for ‘having questioned facts positive achievements of science and on immunization, publishing articles likely to worry the most fragile minds’”

It is monstrous, enough to vomit! In this issue 101, NEXUS reviews the more than questionable methods, let’s even say dishonest, of the way the results of the vaccines are evaluated by the “health authorities”, but for the morons who manage us, “worrying the fragile people” is more serious than killing with alleged facts “acquired by SCIENCE” and confirmed by the POLITICIANS to establish their brand image as defenders of public health! Since the government is stealing our loot to feed the “social security”, presented as a guarantor of our biological safety. Finally, the good news is that the French victims of vaccines have nothing to pay! This is far from the $ 61 million that the US administration is ordered to pay following the damage sustained by the little S.M. transformed into a battlefield (see on this blog). It is true that in all the cases, when governments pay it is with our loot! So that’s really the difference?

In addition, regardless of the disadvantages that the VAT change could have posed to the magazine, at the end of the day it is the readers who pay to protect “vulnerable people”. Now this is obviously NEXUS readers who are targeted as they are said bewildered, looking to hold on to any nonsense, and that’s why they read it, which is well known! More likely readers are all broke homeless, and increasing VAT may prevent them from buying it, and hence they are protected!

It did not work very well since NEXUS is still alive! In other words, NEXUS is not read by trauma or by people with personal bankruptcy! But the fact that NEXUS has survived the test, which is obviously to its credit, does not erase the ignominy of the measures imposed on it! Plato warned: “Democracy is the last step before the dictatorship!” Well here we are! And in 2006 Hollande was not yet president! But the dictatorship of the administration, of the legal and of the oligarchy goes through governments and across the horizon from right to left and back… Do not be afraid: nobody is there to protect you! Since even those ramparts against imbecility cannot afford to be confident to survive!

Finally, it does not show too much, but I am really angry! But it’s been a long time, as I do not have any illusions about what to expect from this civilization in general, in its current and recent form. But this time, I was surprised: I had not thought about it. A proof that I have no really nasty background!

Finally, why don’t I speak a little of the rest of NEXUS 101, instead of my mood swings!

If needed, NDE: Near Death Experience and OBE: Out of Body Experience!

But first, let’s take the vaccines since they’ve been my intro. To start with, we are invited to meet Joyeux and Even, interviewed by Sabrina Debusquat, and the very first question (in the title): “Is the French medical totally corrupt?” Why should France be promoted? Because “France is the mother of the arts, weapons, and laws.” It is true that some countries are known to be less affected, such as Germany and Russia, but ok: “They did not all die but all were struck!”. Two quotes from early famous French authors: Du Bellay and La Fontaine. If only one significant country had an intelligent medicine, the contagion would have caught up with the others since there is no vaccine against intelligence! But even Traditional Chinese Medicine, which has nothing traditional any more since the disappearance of Taoism and its last sages, cannot impress our lobotomized scientists of Occident, which is aptly called “the countries of the fall!” . Ayurvedic Medicine, who forgot to be called traditional, is not much more worth, suffice to see in what state the Hindu gurus are! I spent a few years with a Hindu emigrated to the United States, and what I say comes from our conversations! In addition he was a surgeon at the Einstein Hospital in New York and that of Stamford. Upon retirement he became a psychiatrist and finally a Catholic priest but sedevacantist because of his Hindu roots, that do not like changing divine messages! The worthy son of his father Ananda Kentish, curator of museums in Boston and Chicago and prolific writer whose purpose was to expose the Hindu doctrine in a correct translation in English to the planet. Rama Coomaraswamy joined dead Ananda in 2006 to “verify his understanding” as his dad had explained in his farewell speech at Princeton! According to Rama, the situation of medicine was rather homogeneous as well as corruption through the money which is all powerful, given the Pharmaceutical Industry Gross Product of which she is the slave.

But enough veteran memories and I choose to continue to command you to read the interviews of the two medics who seem to be a bit fed up of what they are required to do. And if you do not know them, outside of a shame that cannot be cured, you have to catch this opportunity! Oh yes, because I had forgotten, but you are forced to be doctor to be able to tell anything about health which can be taken into account. Pasteur lived in happier times as he was listened to while he only frequented test tubes. On the other hand, without this license that allowed him to pass for a doctor, we might not have had the vaccines, or not as popular. This may be to avoid further such slippage, that the exclusivity of medical wisdom is now conferred on graduates from medical schools? Read the book of Menant (Medicine, diets, the terrifying deception) to get an idea of the scams that represent the life and work of our National Louis, the distributor of the vaccine leprosy!

Time for the EMI about which NEXUS wonders why so many are denied. In 2015 if you haven´t seen yet the testimony of someone who has had a Near Death Experience, you have to change your TV channels habits. The first one I saw was that of Pierrette Bres whom less young Frenchies may have known as equestrian columnist on the national TV.

Viewed from home, EMI have two distinct phases and I think that’s the bias on the second which explains the denial. The first phase is actually, just an “out of body experience”, where the subject is aware, in most cases, to be on the ceiling of the OR (but EMIs are also experienced as a result of a serious accident in the open air and there is no ceiling), and what the “victim” says can easily be checked with the doctors and medical staff. The conditions are the same as in the less dramatic OBEs: 360 ° viewing, feeling of knowing all (omniscience), independence of laws of optics (the things become transparent when they interfere, or they become visible if they are necessary, to which none of the scene attendants can testify). But for all that is visible to all and the words that are exchanged and may be reported by the guy who was on the ceiling, it can be checked. That happened to my mother. I told the story in “Let’s be Logic!… in God’s name…” My wife, a nurse, assisted in the operation and wanted to raise the morale of my mother when she awoke! “Don´t bother: I have heard everything, I’m done…” and she spoke of the dialogs my wife had heard: there was no doubt. While Phase 2, the tunnel leading to the light, is probably more exciting, but is totally unverifiable, allowing psychotic reasoners to doubt the reality of the thing by trying to impose their myopic view of their paradigm.

I am somewhat less enthusiastic about “The utopia that will change our lives” according to NEXUS, that is to say, “The basic income” that seems to forget a lot of psychological elements and operating of society. In my village, I have a number of assisted which already operate on a “basic income” and they have in common that they contribute nothing to the operation of the village community. Even dogs or cats like to be rewarded when they were clever. And carrots are not just a means of manipulation. Since we spoke of Traditional Chinese Medicine (TCM for short) why not return to the Taoists communism a few millennia ago: everyone contributed, to the extent of his capabilities, to the good of all. The opposite of egalitarian communism of Marx, which its supporters assure us that we cannot criticize it since no one has managed to apply it… And also there are examples all around us of people who are dying to make things better than others, just for fun, without expecting to hit the jackpot of a football or tennis world champion… and maybe to impress the lady next door. We tend to polarize on money, and the experience of 25 centuries shows us that it is not by seeking to avoid bullshit that we do not invent one or more worst bullshits…

In fact we extend the story of the decline of 25 centuries: once the first error accepted (Aristotle, for example), we will not try to go back to the truth, we will proceed from the error to find a solution on a false basis …

That said, not just so that you do not label me as unconditional NEXUS dummy, I would appreciate to have motivated you to read this magazine, “almost” unique, as it is not the only one who escaped adverts, though this is not the right criteria. I found the atmosphere of the “Planète” of my youth (another magazine) to whom I owe to have met the Sufi that changed my life. Planète too was not taking any pub, but it’s just a coincidence because the real key and common feature, is betrayed by the respective slogans “Nothing strange is foreign to us!” for Planète and “Reality to change” for NEXUS! An observation for one and a program of action for the other!

If your reality is boring, get NEXUS for ideas of change. And to return to my hobbies, take the opportunity to expand your paradigm: The current paradigm is the prison that makes your life so bland! Civilization has never been so pretentious and so shriveled at the same time, contrary to appearances…