Will 21st century therapy be quantum, metaphysical or simply logic? (No. 35 Viewpoint) 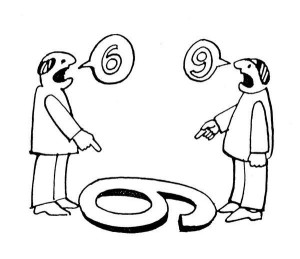 Let us now improve your point of view… as I said when ending the previous episode.

And again, close your eyes! But this time, do not worry about your memories: instead imagine an orange ball.

Good! If it is not very round, neither very orange, do not worry, we do not give quotes!

By the way, again: DO NOT JUST READ, imagine or not what I say: DO IT! I know it’s all horribly banal, but it is precisely because you have never been concerned by that, that you have been lead by your nose… since you were born!

Now try to locate from where you “see” this ball, using for example the knowledge that you have of the limits of your body.

For most of us, this point from which “one” “sees” is between the eyes, a fraction of an inch behind the bridge of the nose. Again, you will not be quoted and you may find that your “viewpoint” is anywhere else…

Look closely at your situation now. You notice a few things, 3 at least: the orange ball that you just manifested in your imagination, the existence of your body, still present and alive, and the fact that you are aware of noticing all that.

And back again to the word “consciousness” using the method recommended by Socrates! This word implies something that is “conscious” and something that what is conscious can be aware of. Consciousness thus connects two things, which is expressed by the prefix “con-” and these two things are separate, which is the rest of the word, i.e. the Latin root “-scio” precisely. As I like to point out: “Gathering what is scattered” is precisely the motto of master masons … which may account for their frenzy of knowledge!

The funny thing is that the first thing that consciousness is aware of, is itself! As if it could split to become an “object of which one can be aware”. In any case that is the meaning of the Sanskrit “Ahankara” which Westerners have given number of translations: the self (with a lower case “s”, the individual human spirit, the source of the soul, etc.

But let’s drop culture and stay on our experience.

For most of us, the location of this “viewpoint” is fixed, which makes us think that it is related to the body, or even, if one is materialistic, that it “belongs” to it. In which case, it deserves its name of “spirit”. I remind again that this word means “The lightest part of a compound.” And a “point of view” is probably much lighter than a bone or a piece of meat, and even if your orange ball should not weigh very much, it has a volume that your viewpoint not even has.

Yet this “viewpoint” is not your spirit itself, it is the point chosen by your spirit from where to “see”. And the choice of this location between the eyes simply justifies the origin of the impression of perspective given by the reception from our physical tools.

It appears in fact, if one refers to the divine source of traditions, that our spirits are rather located in our breasts, where is stored the air we breathe and which is indeed the lightest component of our bodies. That is why the Sacred Heart of Christ is represented in the center of his chest and not shifted to the left, because our spirit is truly at the heart, at the center of this compound which is a human being. This “localization” is also the origin of the term “intelligence of the heart” that has nothing to do with sentimentality or squeamishness, and indeed up to the classical period, when asking: “Have you any heart?” this was meaning: “Have you any courage?” Today, the location has been shifted to the lower abdomen and the usual formula is rather “Rodrigue! Do you have balls”? Even for women!

But I’ll still give you a new opportunity of confusion!

You got the location of your “point of view” by deduction against your body! Not by direct observation: this is not materialized by anything, and even so, it would not be a matter of a point in the geometric sense, since it would have a dimension, a volume. So: it is not visible! If you remember from our previous episode, possibilities too are not visible. Yet this “viewpoint” is already a “manifestation” because you can see its actions: it can “be aware” and even “manifest” (that’s going to gloat Anthony!) mental pictures of orange balls (and that will perhaps disappoint Anthony if this is the only kind of thing that it can manifest!)

Can you still see anything !!!

And if I have not considered that in speaking of the possibilities of the objects of the universe and their changes, nobody prevents you to imagine a bunch of intermediaries such as the successive positions taken by a moving object … But it will complicate your paradigm badly, then calm down a bit: in case you have not noticed, we are just playing with logic. Nothing is serious (there are no quotations nor ranking…).

We still see there are plenty of things unseen and yet manifested. But now let’s look at things, which, although visible, do not manifest much.

If even what we see does not exist!

I have already used this example in my book “Let us be logical”: The reflection in a mirror! I suggested placing it on the ground outside by a cloudless night to observe the cosmos, because of the spectacular nature of what is reflected. But the absence of volume in the reflection can be seen in every mirror. Yet you can see that perspective, this sense of depth! And where is the corresponding volume?

You could ask the same question about a photo or a movie, even in “3D”. And if they are synthesized images as in a video game, which are not even “reproductions” of aspects of existing material “things”, it does not prevent you to make them move and “see” them while moving, even though that nothing moves, but electrons in electronic circuits… and you will not see these electrons moving, will you!

What happens to your idolatrous certainties of St. Thomas, who believed only in “what he saw”, and to whom Christ remarked politely… … of course, he was not very… smart! In fact, he was very bad off!!!

But back to a word that I like and which I have already mentioned, a cousin of “conscious”: the word “consideration”. Here it is no longer only about to be mustered with something simply remote: when making a “con-sideration”, we meet with the Stars themselves! Sidereal, right?

Stronger than Star Wars, and not science fiction!

First, let’s just see how much we are free of our considerations. Consider each of the knuckles of your fingers. Then consider the entire fingers, then your whole hand. Notice that each time it is YOU who set what your consider: there is no visible limits between your knuckles or your fingers! And it is through this freedom that I could make you consider a lot of things for two episodes, including the intermediate positions in a movement, which I announced that I will indicate you the lawful nature of!

Then you are ready to complete your paradigm with “a few!” possible considerations by each of the human beings since the dawn of time until the next twilight. Including lies and fruits of unbridled imaginations such as those of recent scientists. Along with the possibilities thereof!!

Your considerations for existing objects, such as your hands and their “elements” did not need to match any individual “realities” since it is BY YOUR CONSIDERATIONS ALONE that things “take” an individual existence.

Consider some examples. Consider your screen, when you limit yourself to what you see, you ignore its supply of electricity and data. Also the fact that it has a mass, and thanks to which that it stays motionless, allowing it to stay on your desk. But gravitation connects ALL Masses within this physical universe! So which is the “real” consideration? The current one, of your visible screen or that of the universe with all its interconnected masses, including your tiny screen?

My other example is about the trivial consideration of the bodies of plants and animals that you can consider as individual instead of noticing that they are all the appearance of a single vital process, that of digestion, which provides life to living forms over those which are sacrificed so that others can be nourished! Once again: which is the most realistic consideration?

Are you beginning to understand why I put so much emphasis on the matter of your paradigm. And why the American Indian native, unsuccessfully, tried to impress upon their colons that “Everything is connected!”

We have seen that the pure possibilities, those that are not the manifestation of any other, have the characteristic of being immutable, another word for “eternal” and that they do not occupy any volume which distinguishes them from all which is material. This collection of possibilities that overlap and combine is the famous Universal Possibility we were trying to conceive. And in view of their common characteristics of needing no space nor time, we can of course also consider them like being only one possibility, which Saint John (and others) called THE Principe and bring together not only all these possibilities, but also all their manifestations, whether as diaphanous as spirits or points of view, imaginary balls, reflections in mirrors, or steel beams to make Eiffel Towers!

Even the Arabs had understood it! Imagine!!!

They have not only passed on their algebra!!!

If I think correctly, that’s exactly what Ghazali mentions by saying that the “Tabernacle of Lights” is “Before, Above and With”! Before, because the possibilities are before their manifestation, Above, because everything comes down from them, and With, because these manifestations complement what can be rightly called the Infinite! And it is far from current maths!!!