Will 21st century therapy be quantum, metaphysical or simply logic? (No. 18 Emotion) 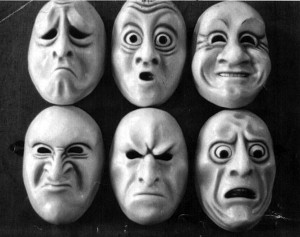 According to Dr. Robert Anthony, we have a “Natural Inner Guidance System”, and an “Essential Silent Partner” to help us and emotions as a criterion. I will return to his Guide and his Partner which I doubt they are what I understand because of the choice of his criterion by which I will start my review.

The low frequency vibrations are used to control the emotions!

We find again the obsessive materialization of physicists when they get into the unknown … Besides, his Guide and his Partner, are just two ways to see mechanisms even outside the physical universe!

Whether or not it surprises you, emotions are indeed perceptible things. If you have a dog or cat, you may have noticed that it is sensitive to your joy, your hostility, your funk or your grief.

Obviously for Anthony: it is a “wave”, a matter of “frequency”…

Perhaps should we examine what a perception is: as a first approach, though it is usually associated with consciousness, it is almost exactly the reverse. “Per-ception” is taking (-capture) through (per-) a distance, while, as we have seen, “conscience” is gathering (con-) that which is separated (scio).

So perceiving implies an intermediary and the concept of ESP (ExtraSensory Perception) is a nonsense because we need an organ of sense or connection faculty to collect with something distant. We should speak of ESA, ExtraSensory Awareness. By the way, for Anthony ESP is its Essential Silent Partner which we will soon speak of, but mowing an acronym used for 60 years by parapsychologists looks quite awkward…

This need of an intermediary lead to distinguish between the thing perceived and what is perceived. For example, the colors are usually attributed to the presence of a kind of pigment, i.e. made of a material which returns the light selectively according to the frequencies. But when you look at the color of someone’s eyes, there is no pigment in his iris: it is the small thickness of the iris that causes interference and makes you see that the eyes’ color is blue, green or brown… It is used by iridology diagnostics. Actually colors only exist when and where they are perceived. Since Kodachrome, in particular, color photos are using pigments, although Kodachrome itself is a black and white film with three layers sensitive to different wavelengths, and “colorized” after development by some very complicated processes that Kodak reserved for itself since nobody else could have used it. Ordinary slide films (such as Ektachrome from the same Kodak) actually have their sensitive pigments in the layers, which reduces the number of baths needed to less than a dozen. Making it possible for an amateur to develop his color slides. Photo color on paper is another matter, but we are not here to make the history of these techniques. Though, and this fits in our subject, Lumière brothers’ Autochrome were slides in black and white which caused quite thick sensitive layer to build “standing waves” which engendered interference such as in the iris, and allowed to see colors without anything being colored in the photo. However the necessary exposure time was prohibitive. Completing the cultural interlude!

The geobiologists who “see” “cosmo-telluric” “chimneys” or “vortex”, fairies, goblins, etc., see the color because view is associated with the notion of color, not because there is the slightest waves in the area they observe. And two like individuals do agree on the colors they see. This shows that their perceptions are compatible, such as physical colors for the majority of individuals.

However the perception of emotions is easier compared to auditory perception, because it is something which has more “weight” than fairies or auras. This does not prevent some of seeing emotions as colors or geometric volumes.

But let’s remain in the sound field. One “perceives” sound waves not analytically, such as a microphone, we perceive them “synthetically” as a “height” (bass or treble) or even as a note if one is a little musician, and moreover in a range, rather limited. Too bass is an infra-sound, too shrill, it’s an ultrasound.

Emotions also go from severe, i.e. death, to acute, i.e. certainty and serenity of conscience. While we can talk in terms of “frequency” let’s just associate them with a different setting, speed, because e-motion is what comes from (e-) a movement (-motion).

In fact at the ends of the range that I just indicated, there is more emotion: at serenity, frequency and speed are “infinite”, so out of a possible field of perception, and at death, speed and frequency are zero, and we also released the possibilities of perception. So where does what is perceived come from?

Emotions can be “seen” at considerable distance (thousands of miles) which answers the question: they are from the domain of the soul, the psychic realm!

Anthony says justly we should get out of our mind (mental) with all its cultural and memory stuff, so why is he so eager to refer us back to emotions? Mystery! Unless he is stuck there, as he shows it with his idolatry of physics and his epidermal rejection of religion, which allows, among others, for not understanding much about the spirituality he thinks he studied…

However, although emotion is not necessarily linked to a meaning, like a word is, they are manufactured by, and stored in that mind. And they are largely as dangerous as the cultural pitfalls Anthony denounces. Without specifying that the pitfalls of culture concern what has not been understood or insufficiently considered… But there is nothing to understand in an emotion! What has not failed to do our doctor since he speaks of them as if there was only one.

As in all subjects, and because of its continuous nature, it can be considered with any cuttings one wants, or even without cutting them as the Doctor. If you hear different notes in the scale, nothing prevents you from doing glissandos or vibratos to explore sounds between the identified notes. Cutting a rainbow in 7 colors (including indigo?) is perfectly conventional and primary colors taught in school by our drawing teachers, Red Yellow Blue are not those used by IT or TV: RGB (Red, GREEN, Blue!) like the cones in our retinas. Yet the retinas existed before anyone started to paint!

So let’s take a walk down the emotions speeds. Some researchers have found many other emotions between those I’m indicating here.

The fastest vibrations will match joy and enthusiasm, then we will have interest, satisfaction, contentment, boredom (often experienced as the center of this area). And with some reason: so far, all goes as well as possible. It is from now on that we will fall into difficulties! Just below boredom, there will be antagonism, hostility which we saw in some detail in the previous episode, anger when we lost the battle, possibly hate and funk the animals feel so well. By dint of losing one will grieve, and then, just before dying, we do not respond any more, it will be apathy. This apathy is felt as a heavy, barely perceptible hum, allowing apathetics to go most often unnoticed.

This shows that emotions are far from being a monolithic bloc, and if we understand that Anthony suggests to let us fly rather by joy or other “positive” emotions over boredom, only to people without psychological education, it is easy to confuse emotions, especially the famous apathy can be taken by his manufacturer as any other emotion, usually joy: which is the ecstatic apathy often seen in nuns… (not superior mothers …)

The REAL healing and purpose of quantum therapies

In any case, the level has little importance, when you’re not really serene, you are in your mind (mental).

It seems that as a good heir to the tradition of hypnossis, Anthony prefers being stuck in a pleasant atmosphere, but remember that an apathetic has NO MORE problems, problems are between antagonism and fear… If it is not the result forced by hypnosis, but it is where you will go through a psychoanalysis!

In all cases, the goal of a truly quantum therapy as I see it, is not to find a more comfortable prison but to be out of all that traps that we were stupid enough to cram it.

To give an example, when I take care of an alcoholic, I’m not trying to give him the horror of alcohol, just to clear his compulsion to drink. I met many former alcoholics, who, having followed a therapy, could not bear the sight of a glass of wine. My clients, by contrast, were very happy to be able to enjoy a glass of cognac knowing that nothing was pushing them to take another one, or even to take this first.

Releasing, means releasing from compulsions as much as from repulsion!

We can see also that the mental prisons of hypnosis are weaker than those that we believe to be released from. That earned the relapses of the first customers of the big time.

Indeed hypnotic suggestion will have to fight with the previous lock, and this will consume energy. After a moment it cannot offset the previous decision (e.g. wanting to drink) and it will resume the former one: end of the healing!

Again, I do not say this is systematic, so many things can happen during a therapy, including events that have nothing to do and that interfere. I’m just saying that in my case I prefer a method that frees me of my rut instead of making some others, however more comfortable…