Will 21st century therapy be quantum, metaphysical or simply logic? (No. 9 Ibn Arabi) 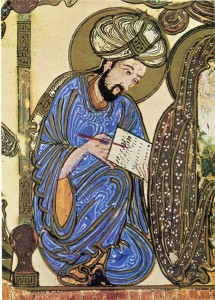 For the rest of the series we will carry on our Trinitarian considerations using the Logic that was the first function we mentioned, the one which can manifest all we need. So that it will perhaps help to discover why Dr Robert Anthony was so lucky to find what he found, and not so lucky to have missed the rest!

When our desires are dis-order!

First, note that our second function, the one of choosing and scheduling, has no hands of its own to grasp things nor feet to walk around. In fact, for it to have hands or feet, the other function that passes everything from power to act should have made them for him as we are the « living proofs » that such things “exist”, so are “possible”!

Speaking of these organs actually, we’re talking about bodies. However, this “function of acting out”, the divine Word, has already obeyed His Commander when manifesting Life, at least its biological version that we have observed. This assumes having bodies, and souls to animate them. In fact just one body and one soul, since life is only apparently multiple because we usually stop at the consideration of the individual forms it takes. But the whole universe itself is alive, in motion, so we can also consider the soul of the universe and consider that life is much more than just plants and critters.

And indeed, the stars and the planets digest each other at an extremely slow speed compared to biology, but observable by solar radiation, and the fall of comets and meteorites. So the entire universe does manifest the body of the Word, which is what His Incarnation told His apostles, when He gave them a little to eat and commanded them to remember that by eating their food it is His body which is sacrificed for their assimilation (survival). The liquid He gives them to drink is His soul, His blood, because of its fluidity, and He could have indicated that the air they breathed was His Spirit, except that this spirit is not limited to breathing as we shall see… (He will also say that “Man is not fed on bread alone, but on every word coming from God…”)

This lets our “function of giving orders”, God, remain at His level of spiritual manifestation, while His Word manifests for Him a soul and a body. Because the Trinity is not decomposable, none of the three functions can do without the other two, if we want to have enough to account for everything that we see… In fact: what would be a pack of pure possibilities without their manifestation, or manifestations without possibilities of understanding? Or the possibility to understand without having anything to understand or anything being able to understand. Or bulky manifestations mutually incompatible, and thus not understandable, because they were not properly selected? So this body and this soul are those of the Trinity as a whole, not just those of the Word, even if it is He who makes them.

A note by the way… Did you notice the trick of the word « order »? It is used to speak of « bringing order to » or « giving an order » and both meanings are surprisingly not so different.

« I was a hidden treasure, and I wanted to be known”

This hadith is qudsi for some, of dubious origin for others. Let those who think themselves Muslims extricate. For me it has the imprimatur of “Mohïddine Ibn ‘Arabi,” indifferently “the greatest master” or the “(spiritual) son of Plato”. Meanwhile, it describes very well Allah as “going from” The Principle (hidden) to all that It manifests (knowable), i.e. EVERYTHING, or, this time, really: the Infinite! So we see the “Allah” of the Arabic is a little different from the “God” of the English… and it’s too bad they feel obliged to translate their word by one which is inexact, but the only one we have in this profane language. Ghazali speaks of It as being “before, over and with” which is an excellent summary…

Let’s get back to our God: because He has a Word at His disposal, God can do lots of things without any body or organ to act!

Until now, concerning ourselves, we only noticed that we were a conscience, but we will look a little deeper! It is not difficult to consider, or even see, that as consciousnesses, we tend to follow a body wherever it goes wandering… And even to consider it as “our own body”, even going to confuse this body with what we are… And if we can more or less control the breath of this body, it does not need us to circulate its blood. So it, and therefore we as well, have a soul, with possibilities of acting on both.

As a consciousness, we saw that we can be aware of things and think of considerations. God, in addition, may make, or have made… Because His Word does it for Him. But during the episode of the Incarnation we were talking about earlier, the Word has the opportunity to show to Peter, who refuses his Lord humbling Himself to wash his feet, that precisely, because He is the Lord, He is at the service of the human beings He has produced! As He is at the service of the God whom He obeys!

So we have in common with God that we can know things and be able to monitor the Word! Do we imitate God, or the opposite? Would we, the consciences, be made in His image? And would this semblance go so far as to equip us with a body and a soul, like Him?

Do you remember that the Word has told us that: « Without Him WE CAN DO NOTHING?” No? Well, a shame…!

And why would we need all of Dr. Anthony´s preposterous assumptions, with his quantum “probabilities” for which we would have to decide the values to give them without even knowing what they will “create”, to keep his phraseology…

In addition, as we shall soon see, even if you could believe that most of our ideas are personal “creations”, God can also “have” ideas of His own that we can “copy” and resume to our account, as Himself even retrieved them from the Principe. Except He knows it, while, as far as we are concerned, we are not aware of being plagiarists… or thieves.

Since we are in His image, we should also know that we deliver only possibilities from the Principle, like Him, and stop imagining being all-powerful and self sufficient.

Especially as His Job is rather simple, since He is only One, while we have 7 billion competitors…

7 billion Gods, that’s a lot for a polytheism!

You are much more powerful than you think, but your power only comes from the Word, not yourself! This brings both a confirmation of what Anthony believes he understands, and a serious shade to what he thinks in terms of “infinite possibilities”; since he obviously does not know what possibility is (or why would he speak about his “probabilities”), and he also ignores what the Infinite is since he applies this word to things that are strongly distinct…