Nationalists, Socialists, or Republican Values: which can we be proud of? 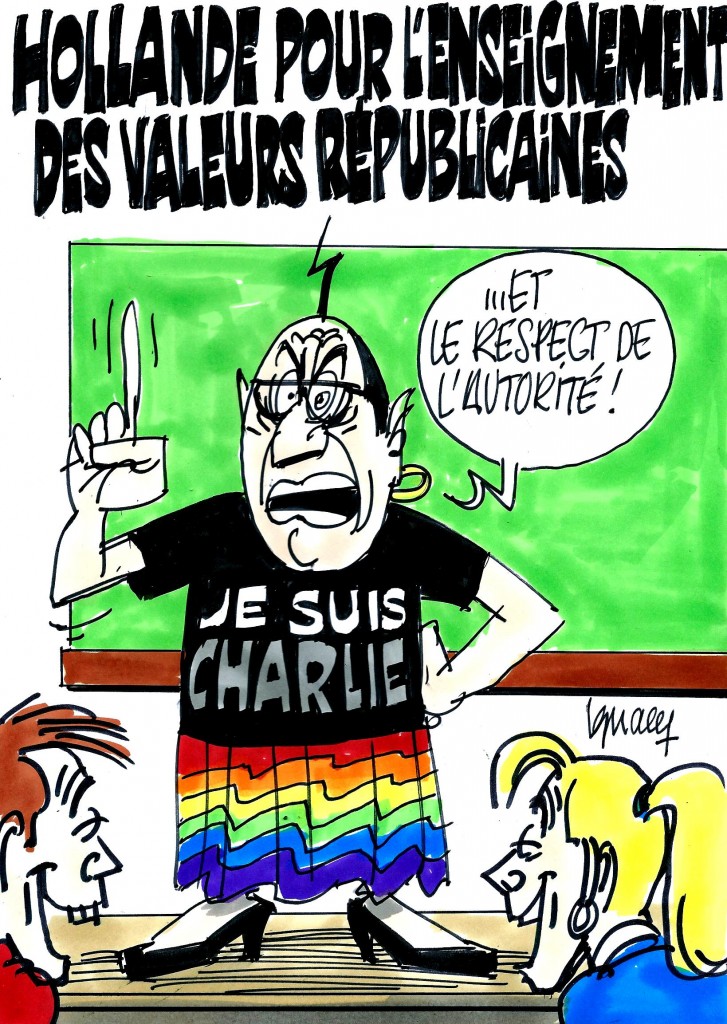 There is at least one Alexis, a survivor from the Bataclan massacre, who can no longer stand hearing the Marseillaise at every turn, and yelled by anyone, or see French flags everywhere.

Rendered suspicious by this good man, probably disappointed that we have not honored him, since he has not had the chance to be killed in the music hall, I was looking at the lyrics of the Marseillaise of which I only knew the first verse and the first line of the last, “Amour Sacré de la Patri-ie!”

So I offer you a topic for an essay! If you pushed your studies enough to have twice the age of reason, you were introduced to the art of the essay (remember: thesis, antithesis, hogwash!).

So try it after taking a look at these fabulous lyrics: « How the hymn of hatred dripping winners of a civil war, can inspire tolerance and brotherhood, as claimed by the heirs of these killings that have eliminated half the civilian population in the 20 years after 1789? « ( As prognosticated by the lovely initiators of the shindig – see Sédillot “The French Revolution Cost” – they thought they could only convince half of the French population at the time – a little less than 27 million. There were 2 million deaths during the Civil War, the deficit fertility due to the uncertainties about the future and the Napoleonic wars did the rest to bring the population down to around 15 million). It is therefore the Napoleonic wars that finished the job, although Napoleon was not a convinced Republican the British SIS (later MI6) had worked well … !

Yet this Marseillaise is really Rock’n Roll!

Because today, in light of recent events, some awkward raised the possibility of a “civil war”: ugh!

The only acceptable civil war, and even noble, is that which the Republic came out!

I do not miss an opportunity, on the other hand, to denounce the hypocrisy of “tolerance”, as if it could be smart to tolerate errors, since the truth does not need to be tolerated. In other words, when a guy says he “tolerates” you, he is already saying that it is he who is right without having to prove elsewhere, and has the gentleness not to eliminate you, poor waste that you are!

As for fraternity, nothing prevents the brothers of being enemies or false brethren. Moreover, it is sufficient justification to remove them to protect them from being liable for other damages, such as the Mormons of Young’s time who would slaughter people they wanted to “save (from sin) by death”!

Why not sell our useless guillotines to Isis to perform Republican beheadings?

Isis’s financial health is clearly better than France. Why not take the opportunity to snatch them a little dough, if only to get some back from what cost us the shameful refusal to deliver our Mistral ships to Putin, with which he would have been more effective in his small troubles in Syria…

You obviously noticed (because you did not see them…) that artisanal beheadings with sabers were very unpopular for Republican media. Which is still quite strange in view of popular jubilations triggered in public squares for Fraternal execution of hundreds of guys.

It would be unfortunate if the inventions of Dr. Joseph-Ignace Guillotin disappear under rust when they bring their clean death and guarantee the first time! Perhaps this is why Isis is not using it, but we risk nothing to snub them with our beheading Republican processes.

Contrary to popular belief, it is not our Doctor Guillotin who has benefited from the use of his razors to finish his days, but another doctor, some JM homonym… (cultural interlude)

A clean western decapitation would surely get global honors on TVs, while current crafts end to cart (sic!) Without making any propaganda for Isis since they refuse to show them to us.

And in addition to the Marseillaise, perhaps we could learn and dance the Carmagnole in front of the TV, it would change somehow of “our dear neighbors” (a pitiful French mini serial)!

And did you know about the Republican barges?

Precursors of cruises, the Costa Concordia genre , or recent charters of migrants, apart a few details… first it was not an accident, and there were no survivors. Populations whom their brothers considered undesirable, were piled up in barges on the Loire river, and then wrecked!

This is less bloody than the guillotine or swords; and more discreet too. But rest assured it seems that it is only mythology… Finally in 3 years it must be that the 150,000 victims of the Vendée wars (over 800,000 inhabitants), should come from somewhere!

Duties of memory or obligations of Republican amnesia?

The gospel of secular religion is still vacuolar! Without the excuse of the Christians, rather badly translated from the Greek…

Why are Republicans not proud to be born of a civil war? Since they never present their revolution as such.

How could they decide to do without their beloved guillotine which gathered crowds in popular happenings for two centuries?

Would not today’s Republicans today be the proud descendants of their founders of which they kept such a fraternal hymn?

Of course Christians may live by, if they are fairly discreet and if they swallow the secular gospel they do not have the choice to refuse to suffer from in school (preferably without understanding …).

They must hide their small crucifix hanging from their necks, which Muslims have not understood by exhibiting their veils: you do not really have the “right” to practice a religion, it is only “tolerated”! So, not be tolerated at all in public. Good habits are lost, once more: when will Catholics be again forced to hide in the catacombs? Or hide their heads in the baskets of the guillotines…

The abstainers, the only true guarantors of republican values!

FREEDOM: abstainers are free from brainwashing of the different parties and so are the direct illustration of the first term of the Republican motto.

EQUALITY: the fascination of voters for the various “nuances” of the Republican ideology is absolutely zero regardless which speech. Of course it’s equality at the bottom, but zero is a Republican number (before it was just a digit) and it is the only one that produces only itself when combined with all the others…: a clear symbol of our second term.

The BROTHERHOOD: the first round of last regional elections, the abstainers were 50%, so one French out of 2. And yet they did not kill anyone opposed to revolutionary civil war of 1789, far fewer, and were yet led to rid France of half its occupants…

TOLERANCE: abstainers are not even crossed against those who do not understand the tricks of my mascot Amschel Bauer (Rothschild), the broadcaster of the motto in question. Which Amschel reported that none of the coolest goyim of his time had identified any scheming. So why blame all the “normal” people who did not see anything either…

For the moment abstainers seem struck by the pitiful achievements (if not the nullity of results) of successive different political factions, and have probably not yet plunged into the mysteries of an ideology they do not question yet, because they are happy with only seeing the fruits!

But the inability of our successive Republican rulers, is not simply bullshit, like Hollande would us believed to better screw us! Or rather: it’s the real bullshit, the lousy use of one’s intelligence, and that’s what makes it dangerous. But at this point they are no longer idiots, they’re bastards!

I know, to have spent some time there, that teaching is not intended to manufacture geniuses but brave idiots (conforms) and I know how heartbreaking it is to see how easy it was to make us swallow all these snakes. But if you really want us to stop “walking on the head”, you’ll have to do a little more than complain! The democratic solution is at hand: your forbearance is available since you are free to abstain: it’s the only way democracy can function intelligently without being at the mercy of manipulators. It will perhaps not last, because if it is the people who govern, it is ministers (not elected) and their ministries who decide. Sufficient proof that it’s all a scam, it seems? In Belgium you have to be rich to abstain because it costs. May it be still the reason why they hosted the suicide bombers who attacked us? Unless they do not want to pay more fines: they must be jealous of us. But who knows!

Did the Republicans wanted to show they could do better than Catholics with their small massacres of the Cathars or the Templars or their Saint Bartholomew which did not even got them rid of the Protestants?

In any case, it is the mark of a true human progress towards mankind’s suicide, as shown by the recent COP21! On a planet in peril, a handful of rich assholes only think about saving their bottles of Scotch and dishes of caviar to enjoy on their private jets! Too bad for their kids and their grandchildren. And those of others!

Abstainers are setting an example: when will you stop voting for these criminals…?

My beloved Amschel never meant to restrict the motto to the use of French. He himself lived in Germany, Judenstraße in Frankfurt, because even a cosmopolitan must have an address… and as he said, he did not care about who governs as long as he managed the finances.

He made his speech in 1781 to debrief the attempts of the English revolutions of the previous century. He first published his motto in an anti-masonic magazine stating that he had tested it for quite some time. Masons took it to their account which ensured its worldwide distribution. The original aim, obviously!

All that glitters is not gold, but the Republican lights are not all divine…

Finally, the French Republicans goyim pounced on it to find a glow to illustrate their “Century of Lights”, which has unfortunately ended pitifully at the Lantern!

This flame of freedom lighting the world has provided an opportunity for two Masons, Bartholdi and Eiffel, to make the statue offered by the “French People” (yes, it was our money!) to the US. Not without keeping a model of it on the Seine…

This freedom to do anything is “clearly” the light of Lucifer, who is its holder. The true light would imply the discernment corresponding to the “fiat lux” which guided the manufacture of a Cosmos by ordering the original Chaos, a Cosmos which was fine before man came in and precisely made it a chaos!

This recent COP21 showed us that the Republican imbecility had actually been broadcasted across the globe, and how moving were Fabius tears, believing he had saved the earth! Before Obama sent everything to hell the very next day… extending the grotesque side of the “pale” lights from before 1789!

We do not know if it warms or if it cools, but we’re sure it’s going mad and that we cannot do anything about it as long as the planet is driven by this team of clowns…

Or maybe we just cannot do anything about it at all! Long life to your kids…