Will 21st century therapy be quantum, metaphysical or simply logic? (No. 15 OBE) 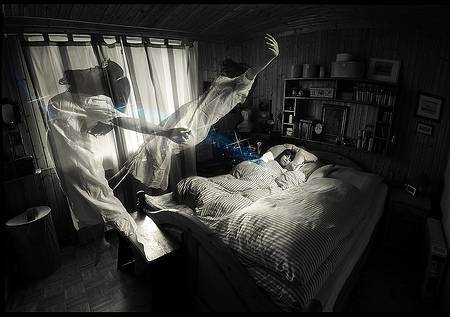 Well, I’m not going to get out of this examination of Dr. Anthony’s designs if I do not use my personal experiences. Because I do not have scriptural references to illustrate everything I know from direct experience, but you will see that it does not contradict, and even that it will illustrate many things we dealt with… Long ago, I watched on TV the testimony of the Near-Death Experience of Pierrette Brès, a former racing commentator. It was not very common at the time. And it was less the mystical aspects than having been outside her body that had me hooked.

It was only years later that I had the opportunity to get out of my body a number of times, I had also opportunities to release others from their bodies, and also to meet people who could spontaneously and almost continuously be “outside”. It is not so much the number of my trips than their duration that allow me to be able to detail many aspects. Nowadays OBEs (Out of Body Experience) have become almost commonplace. In any case as the “Mainstream” Press speaks occasionally of them, it’s true! Because if the “Mainstream” Press does not mention something, it’s nonsense…

OBEs can happen to anyone, anytime, and when I say that I had others experienced them, it’s not that I have a method, only that I was doing processes that could also trigger this, as a sort of proof! But I’d love to know a “trick” to cause OBEs so phenomenal their results can be. Note that an operation under anesthesia does not guarantee either OBE or NDE (Near Death Experience) so do not try to make you need an operation, that’s taking too many risks for a VERY uncertain result.

I’ll try to give you an idea of what is happening. Just knowing well how much it can be incredible for people who never did it. Although it is much more frequent than winning the lottery!

As for me, my OBEs have always followed a riddle I had to solve and gave me its solution. And they have always taken me too far from my body to be able to see it.

But according to the evidence I have collected from people who were a few meters outside their playmobil, I can tell you that to SEE being next to his body, which has its eyes closed (especially seen from the ceiling at the time of surgery) is likely to ask yourself questions. “What is it that sees?”

And that can be the beginning of an avalanche of surprises. If a table or a screen bothers you to see what is behind, they’ll become transparent! This is really bluffing: what you “see” does not obeys the laws of optics any more… One of my friends used this feature to work on electrical systems while switching off the light for safety!

If you remember what we learned with the Sankhya, you can understand now why ahankaras provide their souls with so many channels of perception! And their bodies too. That’s why we have two eyes. Because from a single point-of-view, spirits are aware of the relief and they want their bodies to not make them lose that sense of a third dimension (they do not want their bodies to loose that sense of a third dimension), which from the standpoint of optics requires two distinct views and some gadget in the mind to tweak the two images and create a sense of depth to transmit to the spirit. The same for the ears, since spirits hear in stereo, and even in surround sound. Besides a spirit sees behind it as well as before it, below or above. It seems that to see what is in front of his body is enough for the spirit, simply because sound gives it more complete information on nearby threats from whatever side they come. When it chooses to take its point-of-view inside the body, the spirit most often hangs between the eyes a little behind the front because from there, its eyes will show about what it would see in Direct… What is harder to swallow is that in state of direct consciousness, our spirit can have conscience OF WHAT IT WANTS TO, which suggests to some investigators that when in this state, they are omniscient. And in fact, one experiences that we have the answers to ALL the questions we ask… except those that we ask are based on our common experience and therefore we do not ask the right questions, at least not those that would enable us to be truly omniscient, assuming that we can have time for all that has to be known. For instance, you want to know how is your bloodstream and your flesh will become transparent to allow you to see your arteries and your veins. You want to know what the asshole in the hallway is thinking and you’ll have the answer. Wondering what this gray volume around your kid is and you will know that someone wants to hurt him, and even who it is. It is easy to check by interviewing the “enemy” afterwards. Once it is he (she…) who said: “I know you know, and I don’t care!”. Because obviously, we must check all that can be seen in “normal” conditions not to be fooled…

Obviously we can say that if everyone lived that way we would keep our secrets even less than what NSA, NRO and Mossad are stealing from us daily…

I have no time…

But it is not over!

For now you think that the journey out of the body occurs in space! Of course, but not only… And it may be somewhat surprising for our Doctor Anthony. Actually to be more precise, it’s not your spirit that comes out of the body, it has never been there since it is out of space and out of time. It is because being “in charge” of a body and its mind, he “chooses” a point of view related to these two gadgets without necessarily understanding at his birth that its relationship with them is not of a physical nature but of a causal, logical one, so it may fly its body even being thousands of kilometers or days away from him in the past as in the future! And it is this funk that forces most people to stay “in” their body, and also unfortunately in their soul, that they “furnish” anyhow.

Once, when driving a car on a road I did not “see” because I WAS ALREADY THERE WHERE my body was going, and that this image was superimposed on what my eyes transmitted to me, I was not necessarily feeling that these experiences are always exciting… Anyway, I did eventually arrive, and I did then know that my spirit has already been there for 20 minutes…

Which brings me to the (relatively) bad news related to this story of “out of the body.”

Here is a short list of events that cause it almost automatically! Shock, injury, accident, taking a chemical “drug” (alcohol, tobacco, marijuana, allopathic medicines), a routine life without interest, headaches or migraines. Surely you’ve found some evidence that you knew in the list, and yet, OBEs suggest you nothing! This is because, to be spectacular, “exiting the body” has to take place with the awareness of where we are. And it is this consciousness that is rare, because we feel too responsible for what happens to our body. And we want to continue to monitor its environment, and reject the information coming to us directly.

This obsession has more or less funny consequences. For example, if you have recurrent headaches, you can be sure that you are out of your body. Try to find someone who can help you “go home”, it will save you stuffing yourself with aspirin, especially as once you completed the “internalization” you’ll never have a headache again, unlike aspirin, which effect is particularly temporary.

“Do you have anything for a hangover”?

This story of aspirin is also quite fun: your spirit is “due” to return where its duty calls it, so it manufactures energy to go behind your forehead. As if physical energy could concern a spiritual being. You’d better use it to do psychokinesis (spirit acting over matter) to play pinball without touching the buttons or choose the path of your car sliding on ice. Because your brain (or your head) is sensitive to this energy, which is why you suffer. Aspirin has the same effect as a drop of gin or brandy when you are drunk: the conscious decision explains for your spirit that you are out of your body and so it stops wanting to make efforts to “go back in”! That is quantum medicine indeed!!!

But contrary to the interpretation of Anthony, what can wander in the future is not our soul which can hardly give up its body without killing it, but our spirit. And this happens in the experience I mentioned in the previous episode with ECG, EEG and computer images. Guinea pigs are warned they will see pictures of different types of which cardiac and encephalic signatures were recorded. The guinea pig’s spirit goes slightly in the future (a split second) because he wants to “know” without actually leaving the body of which he has the custody. The logical causal link with his body informs the latter that the consciousness of the image came to the spirit, who did not notice it, with his body too busy staring at the blank screen. This interaction takes place in the chest, the heart of the being, not necessarily the physical heart, yet the latter is located in the lungs, that is to say the center of breathing, the place where the air is located which is the lightest part of the body (this is the definition of a spirit!). Then nerve impulses transmit the “shake” from the heart to the brain, quickly enough so that the EEG records the event before the image reaches the screen.

A gifted tennis player does about the same thing: he goes slightly in the future to perceive the intention of his opponent, allowing himself to move to the right place in the half second the service lasts. In his case, it’s not a picture which he expects to be aware of, but an intention, something perfectly mental and relatively easy to catch.

Hook yourself up a little…

Electropsychometers of the 19th century are no longer here in 2015, but you can play with an ordinary resistance meter. Keep the electrode tips in your hands. If your mind (not your spirit!) is not concerned, the resistance of your body gently floats with a kind of sinusoidal move. If this is the case, ask yourself some difficult problem: the resistance value will freeze and tend to rise. Decide that you have nothing to do with this problem and the resistance should relapse to its value at the start of the experiment!

This “body resistance” that you measure is in fact influenced by your body’s reactions to the influences of your mind (again, not your spirit). And we can see clearly that these reactions are not “ahead”, simply by asking someone to pinch you and the ohmmeter will react at the precise moment of the pinch. You can reproduce this reaction, thinking back of the pinch.

When starting this episode I did not have a clear idea of the place it was going to take, and I see now that I still have some comments to make on relationships between Spirit/Soul/Body, always from an experimental point of view, with a pinch of Doctrine, if the opportunity arises.