To celebrate the 2nd round, go and see “The killers of the Republic” by Vincent Nouzille 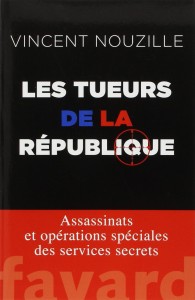 I want to publicly thank my boyfriend and his luck which made me discover this book and its author, of whom it is not the first offspring. Look for his name on the web with Fayard or quenelplus.com (where you will find a lot of the same stuff). I should note that I had arrived at his conclusion by examining the psychopathology of our leaders on several pages of my blog, but now you have the evidence…

Vincent Nouzille a hero of the XXI century!

His bibliography, that I let you see (on Amazon or wiki), is eloquent and I blame myself for not having met him earlier, because he is just 13 years younger than me.

He apparently began to crack in ’88 with his “Citizen Bouygues”.

In his “Killers”, do not expect any surprises unless you’re incurably naive, but to have confirmation of your worst nightmares!

His book was released this year in January , and I think the election we just suffer provide an excellent illustration.

Departmental, 2nd round: 1 out of 4 French forces the three others to suffer representatives he did not want!

This is the magic of “republican” “democratic” elections in two rounds. The winner comes out with the majority while his true score is the one he had in the first round, and again provided counting abstentions. So it immediately looks least shabby …

Then a question arises, in a time where we have to find someone to blame, even for a simple accident which discovery of the “makers” will not resuscitate the victims.

1 / politicos who are holding the voting system in two rounds.

2 / Voters who force themselves to vote for candidates they do not want in the first place!

… And who imagine doing a “CITIZEN´S DUTY” while they are only the ACCOMPLICES OF A DICTATORSHIP!

Is this something to be proud of? Can you still look your neighbors in the eyes after youcondemned them to pay guys and girls you did not even want to begin with?

Because France is perhaps not a “shitty country”, but its management of democracy is that of a SHIT DEMOCRACY. This is particularly visible with 50% abstention. But the scam is from the beginning. Two laps polls WARRANT that the winner did not have the majority to begin with and thus that the “power to the people”, an alleged characteristic of a democracy is completely bogus! It is the government by a MINORITY’S OPINION!

And when the abstention reached every other voter, the winner, even in the second round, only represents 25% of the electorate, at best, less those in fact who did not want him in the first round…

If the perpetrators of this scam are in option number 1, it should give you an idea of the honesty of politicians, ALL PARTIES COMBINED, even outside of the famous LAWSUITS which are not too much to their credit.

If one considers the option number 2, it goes back to the terrifying proportion of naïve people, of the kind that might be surprised by Nouzille’s book.

I’m not talking about the looming fear politicos have that abstention reaches 67% of the registered, but how these politicos are trying to shame the abstainers, whereas it is THEY who SHOULD BE ASHAMED TO PRESENT THEIR barely human DEBRIS to the vote of their contemporaries.

On the occasion of the election, I heard again that abstention would be valid only if everyone abstained!

It reminds me furiously of the argument to force vaccine on people: “TO PROTECT VACCINATED ONES, EVERYONE MUST BE VACCINATED!” If this sentence does not bother you, look at it. Above all, do not think, you already think too much without having the means for it! If you do not find anything strange, look better… If you still find nothing obvious, forget it: you surely have a vocation of jerk so just keep doing your civic duty as nice doggies trained for the gutter.

Because the winner of an election needs not unanimity but forabstention to win, it must be unanimous!

Anyway it’s unplayable. For a winner to be agreed on by everyone,he would have to be so smart and have so much discernment that he would get everyone to agree. That is only expected for the Antichrist! And again, even if someone had all the qualities above, there would always be this “moron-next-door” that would not get it and would not vote for the providential individual.

The solution of democracy is perfectly simple: everyone is extremely intelligent and has a lot of discernment to elect candidates corresponding to the ideal mentioned above.

You see, even you do not believe it! Yet we have a fabulous tool: the “republican” education, of which effectiveness our politicians are perfect examples!

Well, that is, we’re screwed!

We should first become clear:

Whether a king, an emperor or a president, if he is a moron: it is a dictatorship!

And democracy can do nothing to protect us better than other systems.

When will we realize that intelligence and discernment have no substitutes, and stop from running, even begging them, behind the kind of individuals Nouzille is talking about?