Worrying news about the blackout on cholesterol petition 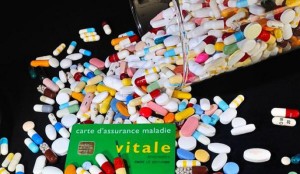 Augustin de Livois from the IPSN (Institute for the Protection of the Natural Health) has sent a disturbing email! Titled:

“No television, radio, newspaper has so far raised our petition on cholesterol-lowering drugs.”

“Yet this is a public health priority. Six million people in France alone taking these drugs. Their health is at stake. The consequences could be serious. Some fear that they are worse than those of the Mediator.”

“But when the scandal breaks out, it will be too late for the patients!! They will have needlessly suffered significant side effects!”

“Has there been a motto? Some informal instructions?”

Obviously Augustin did not answer that, but it is surprising that for someone of his age, the question still arises! As if the medical profession needed slogans or hidden instructions to defend itself, or its little mortal secrets?

Okay: “Murder by Injection” from Eustace Mullins, has not been translated into French, nor his “The Secrets of the Federal Reserve,” or “Dumbing Us Down: The Hidden Curriculum of Compulsory Schooling” by Thomas Moore or “Wall Street and the Rise of Hitler” by Antony Sutton, but those are on the Internet, even available from Amazon, and Augustin should have employees who read English and can tell him if he himself does not practice the language of Shakespeare.

But this interpolation gives me the opportunity to talk about the Great Secret of the famous and alleged Conspiracy Theory. The aforementioned books will tell you about a bunch of symptoms of this plot, but none will give you the identity of its originator and its leader. If a guy making you believe he does not exist, about a plot that does not exist either, reminds you of someone or something: you have the answer! Meanwhile it will be difficult to escape a conspiracy that does not exist, unless we know its nonexistent author!!!

Back to our crooks. In other words, our beloved media do not care about the health of a tenth of the French population! But how loud do we cry when we need to “honor” a few deaths from collateral damage! So, even if your parents die because of statins, no media will render them any tribute…

Moreover, it is curious that it is enough that people die by accident so they deserve “tributes”, as if their last act had anything of merit… It just may be the same reflex which sends all the people to the church when the seniors of a village have disappeared in a bus in flames. Neither the victims nor those who gather in the church, frequented church assiduously, but massive deaths make the whole world Christian! To what or to whom do they think it’s going to serve? Do they believe, or do they hope, that God does not know their hypocrisy?

But back to health again.

“This is the phenomenon we faced for our petition on the DT Polio vaccine with Professor Joyeux. Up to 300,000 signatures, they managed to stifle us. Nothing filtered through the media.”

“It is only then that the dam cracked. Once the dam broken, the Minister of Health was forced out of the woods and we then had hundreds of citations and publications in the media. For several weeks the DT Polio vaccine scandal has been mentioned everywhere. All TVs have spoken. Our initiative got the message throughout the Francophone world!!”

For my part, I owe you a mea culpa for having missed the vaccine petition, I spoke of it but without particularly encouraging.

Rather than sending selfies on “social networks” to people who do not care about you and what you do or what you become, turn the Internet into something useful, using the web to broadcast messages that make sense.

Try to follow the Professors Joyeux and Dupuis, but also Michel Dogna, the National League for Freedom of Vaccinations, Alternative Health, Vincent’s Bio electronic, etc., in their efforts to protect YOU, YOURSELF, and YOUR FAMILY, and YOUR FRIENDS. I will eventually put a #health hash tag on health posts where I’m on it to give a helping hand to the enemies of allopathy who have enough discernment to avoid the kind of epidermal racism shown in many ways by allopaths against alternative medicine!

If allopathy had the results it announces, hospitals would be empty whereas it is the countryside that is empty of medics because these defenders of our health deal much more efficiently about their loot than their effectiveness.

They do not boast much about it when they use the help of healers or fire cutters. I knew a retired engineer from the French railroad who became a dowser, and cured amounts of cancer by checking his results with medical records, with the scruples of an engineer, records he sent to physicians in his area who never answered or even acknowledged. I know several effective fire cutters who will not be paid for their interventions and which, unfortunately, also refuse to communicate their contact details in order to guarantee the quality of their results that their quantity would jeopardize because some processes are rather tiring if they are to be well done.

If you only knew the results a fasting cure may have! You will find lots of places on the web including its unavoidable nonsense. But check and make a synthesis of what you read before going to a cure+hike, which is not the only way to fast…

If it falls like a hair in the soup that I speak of fasting instead of statins, it is to indicate that if statins are, in addition, dangerous, most drugs are useless: the body very well knows how to get by on itself if, precisely, it is left alone. What seems to be the case of fasting. For fifty years, I met cancer cured by fastings of twenty days, without necessarily being followed by doctors, which in any case do not understand much about fasting…

That is not simply because they are useless that allopathic doctors are not dangerous with statins as with Mediator or vaccines. And remember that if it costs you nothing to be sick because it’s social security who pays, its money came from yours, but now it comes from your kids and your grandchildren. The quality of social security management suggests a bottomless pit that is added to the ineffectiveness of its results.

And do not say: if fasting were efficient, we would know it! Because it IS known: it is only you who do not know, for want of getting away from your press and your mainstream TVs. Look a little outside of the box, and you will see unexpected things. Obviously you can have doubts about the quality of your discernment, because your education has degraded it! But it may be the first disease that would require you to take care of… Especially as we have now to apply the opposite of Occam’s razor: what you think most unlikely and most criticized is probably true! Be guided by what every right-thinking refuse, there are nuggets to pick up.

Meanwhile there are emergencies!

So rush to http://petition.ipsn.eu/petition-danger-statines-cholesterol/message.php, and sign it, it will not take you the day… Even I found the time to do it…

WE are the ONLY ONES able to stop the killings endorsed by legislators and Justice!

It’s been lasting for a while it, and all people I saw stand up against these criminals, Béchamp, Passebecq, Beljanski, Vincent, and many others, have just won being ridiculed for lack of support from the people, while they had saved the skin of many of the same people.

Today we have the Web to make us heard, but as I said then: stop using it for nonsense, and be truly helpful… for once!