The conversion of the church is on, and Francis gives the example: he passes from football to soul music! 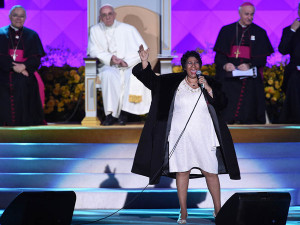 That’s it, it is launched: it is not the Gospel yet, but it’s not a national anthem at the end of a match.

Must we conclude that the “conversion of the church” at the “Jubilee of Mercy” has just been inaugurated by Aretha Franklin’s concert which was attended by Francis?

Rumor has it that he was moved by her rendition of “Amazing Grace”! A good point for him as it is vaguely related to something Christian! So what’s happening for the church is not known yet, but here it goes for Francis softly, but perhaps surely?

Did the lyrics made him think of something autobiographical? You know, “I was blind but now I see!” Or a wild hope?

It’s not really catholic though, John Newton, the slave merchant who composed it in 1779 was Anglican. But we’re at least taking some distance from the football business and its billionaires, which Francois has also not yet lambasted, him: the apostle of the poor… Obviously when you have eyes on the ball or on the big thighs of old kids playing with that little ball, we do not see much else.

That would not do this paragon of humility, not to be on stage with a group of various other celebrities on the occasion of his “Festival for the Family”.

On the other hand he cannot hide the fact he is bored when far from a balloon, as he left the concert without listening to “Nesson Dorma” which Aretha wanted to be her gift to him, an air from Turandot by Puccini, as if Francis could be interested by Italian music! Argentines are quite chauvinistic…

Unless it’s Aretha who has nothing to do with the presence of the Pope, like Andrea Bocelli, an Italian tenor, friend of Celine Dion, a guy to whom the pope draws tears, and another guest who continued to scream his lungs while the Pope was gone. What tears are we talking about now?

It appears, moreover, that Francis wants to produce a rock album, “Wake up!” (Out November 27th) which would suggest that his conversion still needs improvement.

Francis’ career in the Rock is not very lucky: originally the name of Rock’n Roll was given to mock Jesus, “the Rock that never rolls”, solid enough for us to build a church on it. He should have the opportunity to launch the “pope music”!

The “new apostle of progressive Rock” has nevertheless taken care to make a “pop rock” album, according to commentators, pop without the « e », the gag is missed!

I’m not the only one to appreciate moderately the pervasive Vatican puppet gesticulating on all political and other scenes dealing with anything, but teaching what his position should involve. In particular Paul Gosar, 17,000 views on Facebook, explaining that: “If the Pope chooses to act and talk like a leftist politician, he must expect to be treated as such!” But outside of the famous network Gosar, is not followed by any fellow Republican. What are they afraid of? That Truth would not make them free? Contrary to the declaration of Christ?

Personally I don’t care about the political direction of Francis. I’m just waiting for him to be a pope more concerned with truth than popularity, and his simpering to pass for a “humble” Pope (we already have a “normal!” Francis as our President in France), that rather makes me want to vomit!

When he thinks that it is necessary for the church to convert on the occasion of a spectacular Jubilee, I’m afraid he is unfortunately right, but his rock star airs will not convert his troops but to him, Francis, Christ is far away… especially in another direction!

It is better than someone who can be heard would talk about ecology and the threats that hang in our faces, and since no politico has the balls to deal with it seriously, why not a “pope”? In the current mess where nobody is really in his proper place, we must be content with what we have, but the fact that even the one who plays the pope does not do his real job tends to make me pessimistic! What will he do when he has saved the planet and let its population be lost? Maybe he doesn’t care… if he thinks that it is Jesus who came to save us. Too bad there is no trace of the fact that he sang “Hotel California” by holding a soccer ball between his knees on the Cross!

In any case, and especially as he may feel a bit alone, that Paul Gosar pleases me rather well.

Oh! And by the way!! Do you remember Christ’s warning to His “true” disciples: “You will be hated as I was hated!”. Popularity does not seem to be a valid target for a Christian. This is the difficulty of being a pope, to be noticed, but with dignity, to remain a Christian at the same time so that his Lord would recognize him instead of saying: “I do not know thee!!!”

Since Vatican II the Catholic church skids completely. It only confirms 20 centuries of lies, but we will probably have to wait for the return of Christ to set things straight back. Meanwhile Francis would do well to study, and be aware, of the specific characteristics of the antichrist which must precede His return: he starts to accumulate them… But that seems to be his puppet goal.

If you want a summary of the continual enormities of Francis, I can send you on mostholyfamilymonastery.com, warning you, I do not endorse everything they say.

Today religions are dogmatic, thus “closed”, and religious people would do well not to take care of what is beyond their dogmas, so their competence, in this case, avoid critics regarding statements about Hinduism, Judaism and Islam. It is true that for the same reason than themselves on the site, a pope does not have to talk about them, or even simply to deal with them, and it’s not the reason for which I send you to their website. It is for everything they say about what is strictly Catholic, or even Christian, if you like, where their opinions can be lawful. And there is enough of it… A real deluge!

The attitude of religious Catholics is all the more surprising that their Lord came to them saying he was “incarnated” to “fulfill”, i.e. “complete”, the biblical tradition given to the Jews! Which should be enough to tell them that Jesus is NOT the only revelation which God has gifted us. What does not seem to have been considered by their dogmas. Moreover, a God of Love, omniscient and omnipotent, which would have left His “images” floundering for millennia before sending them His “only Son”, would He be worth the trust He asks of us?

Being neither a pope nor “religious”, I can tell you that the Hindus had prophesied the coming of Jesus as the 9th avatar who was to succeed Krishna and be born outside India. They also expect His return to the end of time (their Kali yuga) just as Muslims (who recognize Jesus as the Seal of Holiness) and as Christians should. As for the Jews, François should take into account that they have missed the first coming of their Messiah (despite all the signs worked by Jesus to identify himself as such, following the many Messianic prophecies of the Old Testament) and stop to forgive blasphemies by everyone probably hoping that his own blasphemies will also be forgiven. Miscalculation: a blasphemy is not an offense against him but against God or His Son, and this is the only offense for which the pardon is not planned! Where are we going if a guy like me should remind his doctrine to a Pope! For details, see my “agnostic Heresy” published by Bergame!