The Pope Who Did Not Love Priests: Bergoglio (the one who is called François) 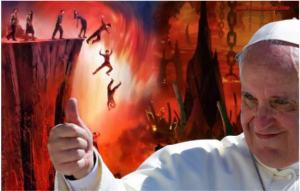 If you read Italian and the puppet Pope interests you (i.e., if you have time to lose and information to gain), check this article.

But the blog of Antonio Mastino is full of original things and has a (relative) independence and anyway you will find there stuff you’ll have no chance to see elsewhere.

As his Italian is pretty rough if you do not speak or only poorly Dante’s language you will get the translation on http://benoit-et-moi.fr/2014-II/actualites/le-pape-qui-naime- not the pretres.php with an intro of the translator. And if you speak neither Italian nor French, here is your chance!

Bergoglio is much worse than what I’ve described…

I contented myself to play a “profiler” in my posts on Fanfan because he does not excite me enough to follow everything he does and what is said about. A friend of mine has put me on the track of this article that I will now be able to use as a reference for readers who believe I am exaggerating.

In light of what we learn here, I’m afraid I have to reconsider my assessment as to whether Fanfan could be the Antichrist: here we find the features that were missing for me to decide.

Yet I notice that one of the features is still missing: the plebiscite as manager of the planet and head of the New World Order (the Novus Ordo Seclorum as printed on the ONE dollar note) but the popularity of this fake does not seem to stop increasing. In any case, according to Mastino, he has all the charisma to mesmerize malleable enough voters who voted for Hollande, Obama, and even Merkel, and many others elsewhere.

There is no reason to wonder why Catholics themselves noticed nothing, since they were stuffed by the Vatican II psychosis, they are since sealed and shielded, and those who survived thereto (the “trades”) have moved back only a few centuries, not a good enough start to get rid of at least a millennium of lies (see my “Agnostic Heresy” for details).

Fanfan is the worthy heir of Marx, the “defender of workers” who would spend hours in the shower to erase the traces “left by the shadows of the workers” encountered in the day! And that these workers were subhuman, a Marxist version of the goyim, i.e. cattle in Yiddish!

The goyim of Fanfan are the priests which he does not even try to hide his epidermal and visceral hatred, so that all his little body is concerned.

I have already mentioned some of his doctrine, but Mastino noted in many other errors: the Fanfan definitely has his own version of the Gospels as well as of the Old Testament, and we understand better why he wants his “Jubilee of mercy” to “convert the church”. Indeed if, as one might expect, the Catholic Church consists of “baptized”, thus “converted” (because it verifies the conversion of newborns before their baptism!), they are not converted to the good doctrine so they have to convert again to the leftist fantasies of the Gospel of Fanfan! What should be more difficult for Catholics than for Atheists who probably even expect it! Because there are far fewer differences between the teaching of the secular church of Jules Ferry and his successors and that of Fanfan, than with that of Christ! So we can expect that Catholics may be overwhelmed by a tsunami of neo-converted atheists into ecstasy before that Marx who became pope! It is little known but Karl would have written poems to the glory of Christ when he was a teenager! Another one that the alleged church will not have saved!

Another detail leaves me a little dreamy: that the website benoit-et-moi, which presents itself as “A site 100% “benoitphile”” fires on Benedict’s successor who is not, however, very different, and I’m apparently not the only one that is puzzled in particular, about having kept the reference to Benedict. But, we learn “It is possible that this site has been hacked!” Without further details but the fact that he has moved to becoming “RSS”, an acronym which has no connection with a change of address… The “.fr” is also rather strange as we find relative indications to Bavaria, Switzerland and someone sent them a post addressed to “Madame”!

If someone wants to explain something of that bins.

But let’s leave the Web and its subtleties to return to the “pope”!

I remind that Benedict was the last pope prophesied by Saint Malachy, which validates Fanfan to many that he is the Antichrist awaited since Nero (the first candidate…)

But the prophecies are made to be understood once they are carried out, which does not mean understood by all. For example, the “signs” worked by Jesus clearly matched the prophecies called “Messianic” which did not prevent the Pharisees, the “Doctors of the Law”, not to recognize Him and crucify Him the way announced by Psalm 22 “No bone of the lamb will be broken!” A psalm quoted by Jesus on the cross: “Father, why hast thou forsaken me?”! In Aramaic. Not a cry of despair: but an indication for us that everything was as “expected” and that Jesus knew it, of course! And He “died” before he had his legs broken as was customary with the crucified who had the bad taste not to die quickly enough… Ah! People knew how to have fun in those days!

On the “other hand”, in his Gospel branded as “Apocryphal” and of which the church does not want to hear, Saint John warns us that in his time there were already 10,000 antichrists, which may explain the amount of candidates for the Supreme position. But after being a “Legion” there will be just one “beast” to rule the world, whose number will be 666, and which will be located IN the hand or IN the forehead so that everyone may “sell and buy”. The central computer of the Swift inter-banking network who ran the credit card system had already been dubbed the Beast, and the prophecy is not far from being compelled with the injection of RFID chips, if only to protect us from Isis and because cellular phones can be thrown in bins and not indicate any more our position by its location. In addition, those chips will tell whether we are dead or alive which will save much research expenses for the missing, if we neglect corpses.

In other words, watch the news from a little higher, and perhaps you will understand why the UN finances the alleged Islamic claimed State. By joining the dots since the planet is fast becoming uninhabitable. As said Gilbert Cesbron “It’s later than you think”, and that was in 1958, by an author rather mystical and sentimental who only sold one million of this book instead of 3 of his “Lost Dogs without collar”. Should we conclude that we like less to be warned than to get excited for a world championship around some ball which will change nothing…

The most serious competitor Fanfan has is … the Dalai Lama!

It is also little known, but a Hindu text, the Kalki Purana tells us that Kalki will come to the end of time to fight the Antechrist at the head of Buddhists. Which are much less popular than people think by orthodox Hindus who had expelled them from India at the death of the Buddha and that the English brought back in order to mess up things a little more during colonization.

The current Dalai Lama seems to have a lot of trouble getting on with his flock, so perhaps it will be the next one, in any case since JPII (John Paul II) relations between the two heretic religions have tightened to the point that it is well possible that the Antichrist is a duet! Each caring of his small people…

Anyway, I already warned that I had nothing of a prophet and I will not play it. I merely indicate prophecies from elsewhere and by qualified prophets and you can get what you want from them, but it can help you be less entranced by our contemporaries “heroes”.

There are days when a certain word tingles in my ears: “After all that I have revealed to you, if you continue to make mistakes, I’ll even help you there!” Personal version.