Will 21st century therapy be quantum, metaphysical or simply logic? (No. 20 Consideration) 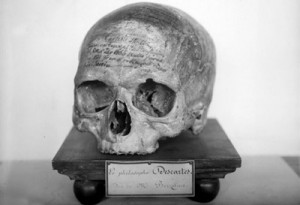 “The only thing I am sure of is that I doubt!” Moving confession of René Descartes, both noble and humble, humble because he admits it, and noble because he does not want to be mistaken for a paranoid: he has only one certainty… And what huge impact on budding and disoriented Cartesian, who became his followers… Descartes (des cartes = some maps? yes, but no GPS!) thanks to the generalization of his only doubt, clearly everyone seeks to have other certainties, that which earned us the universal spying, which began with fingerprints, credit cards and the SWIFT network, DNA, locatable phones and RFID chips. The “Monkeys of God” (Lucifer, Satan, the devil and their buddies) are busy imitating the eternal field right inside the changing universe. Everyone can now be localized by his identifier, no more by a conventional geographic address, just like in the land of wizards and magicians. In this whirlwind of a disoriented humanity, I thought that before showing you how to do the tricks promised in the previous issue, I should maybe explain how, or why, they can work. So: a little more patience please…

If you recall, we first found that all that seemed to exist was the manifestation of a corresponding possibility. Then one of those possibilities was that we were consciences, we were “con-scient,” i.e. we could “gather what appeared to be separate”, us-and-the-rest, and in fact, as far as can be what we could be aware of. Hence the idea to take care of our considerations (con-sidereal). And we saw that this consciousness belonged to us alone in our dealings with what we are conscious of. We could be aware of everything and anything, and especially aware of the cohesion among our considerations. Our first consideration is simply that things are possible, and this is what Saint John calls THE Principle, i.e. the source of all that is possible.

Helped with examples, we saw that our considerations could carry on what seemed like globalities or every detail that we liked considering. So let’s go!

We can consider anything we want as types of consideration, the choice depends only on the point of view. Ours will consider the possibility that a possibility be manifested. And you will see that our selection covers all cases, as our functions for the Trinity.

So in fact this third type has two variants: I consider something possible to manifest or something impossible to manifest. And who decides that it is possible or not? The Verb! Ultimately, yes! But if your consideration itself includes its impossibility, the Verb will obey you nicely so as not to offend you, thus making your consideration impossible.

For example, you decide to levitate being convinced that this is not possible and you do not levitate. But, levitation IS possible, go ask St. Teresa of Avila. For years she fought against it… Her levitation was automatic, it was enough that she attends a mass to starts levitating and flew back levitating in her room. Which could not be interpreted as a miracle for the church which considers the presence at Mass mandatory for nuns!

Once a nun even saw Saint John of the Cross levitating beside Theresa.

But why not ask the opinion of Verb itself?

You have probably heard of the story: “If you had faith as big of a mustard seed, ye shall say to the mountain to go, and it would leave.” There are even variations that speak of trees that turn upside down!

« If you had as big as a grain of sand of confidence in saying to the mountain to go, it would leave.” Ooops! “Faith” has disappeared, remains the “confidence”, but in what or whom? “Confidence, or trust in the fact that if we consider that the mountain leaves, it does so!” Where has God gone and any belief? Is it the Verb speaking here or some of the priests?

Most people I met who had unusual abilities cordially vomited the church and its representatives. Go and talk about the church to my girlfriend Nadine who was levitating objects and you will see how you will be received!

If anyone believes that EVERYTHING is possible it means that he considers the Principle of St. John which is the only thing needed to be considered. He will be submitted as everyone to the Will (the choice of what is manifestable) of God the Father, by accepting it completely since it is only going to modulate his notion of ALL restricting precisely it to what chose the Father… So such an individual will constantly BE LIVING the Pater Noster instead of mindlessly mumbling it without understanding, as most often… And he will have the only logical attitude, since ALL follows from the Principle as Saint John tells us, “In The Principle was THE Verb!” This statement is a declaration together with the proof of what is said!

Since the logic (the Verb) is to move from cause (the Principle) to its consequences (the Verb), which presents Himself as manifesting Himself, allowing Him to manifest God (continuing with Saint John: “The Verb was God”!) and then differentiate “The Verb was with God.” Everything here is demonstrating the reality of the Holy Spirit Who explained all this to us through St. John´s pen!

Before crying for blasphemy, consider that the Verb is the first element that Saint John reveals in the Trinity, Taoism is also the tradition of the Verb for the extreme Eastern, that the first manifestation for the Hindus is the Holy Spirit and the Verb Himself explains to Peter that it is because He is his Lord that He is there to serve him, as He serves God, the Father, having manifested Him because it is precisely His job, and at the highest level.

This confidence as big as a grain of sand is equivalent to the absence of doubt, which evokes how Descartes is a human wreck, roughly the total antithesis of an image of God!

How to manage so that doubt does not color our considerations?

Excellent question! Too bad for you, we will have to review the question of the spirit and the mind (soul). You will not have the process this time around!

Has God a memory? What would be the need of a memory to an omniscient entity since it can directly know everything?

So, as an image of God, we have no memory either? As a spirit, indeed, but our inability to locate ourselves elsewhere than where our body is, gave us the habit of recording videos of our lives in our mind. Remember that our soul is composed of automation that animate our bodies, breathing, digestion of food and drinks, the circulation of blood and lymph, the evacuation of sweat, urine and turds… And an automation is a process triggered by one or more particular event. So if you record what is happening around you, how is it going to be used for automation? Basically to build habits. Except that for it to work, that is to say being able to protect the body from what threatens it, the triggering must be as fast as possible. And the body has a huge number of sensors while as a spirit, we are often aware of one thing at a time and even only if we attach out attention to it. But these triggers are only perceptions, because the soul or the body have only perception, as consciousness is in the spirit… Or more accurately consciousness IS the spirit. When training a soldier, his soul may save his life because its automation have been properly programmed. But without such a program, as for sports, the result is almost universally dismal!

Try to imagine everything you think that’s impossible and you’ll get dizzy. But every time you consider something related to this consideration of impossibility, it will be effectively impossible to YOU!

Everything your next door neighbor, your brother, your priests and Isaac Newton told you that it was not possible,

Our “memory” as a spirit is in fact what the Hindus call the « Akashic memory » (ethereal memory), i.e. that the universe “exists” NOW from its beginning until its end. You see? Still another impossibility which you had not thought of!

So in the exercises that I will offer you next time, it will be question of getting back memories. It has nothing to do with EMDR by Francine Shapiro (Eye Movement Desensitization and Reprocessing) which will be discussed later. But if your memory is the projection of what you experienced, it means that you’re looking at a recording in your mind, but if – though extremely rare, but possible – you are exploring your environment by seeing the scene, from elsewhere than where your eyes are, it means that you are in the Akashic memory, i.e. you are at the very time you want to remember.

You’ll see next time how fast your mind branches on what it registered. And it will give you a new dizzy thinking about all the disabilities you have harvested by long studies! This does not guarantee that you are in better condition if you have not been far away and that you have developed a cultural inferiority complex, which biases you towards a bulimia of movies or TV series or towards this stultifying drive to useless video games, unless you want to dream to become superheroes, cultivating all that makes you incapable of…