Will 21st century therapy be quantum, metaphysical or simply logic? (No. 19 Confusion) 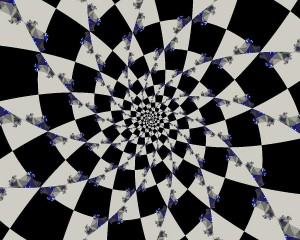 In fact even if the “Natural Inner Guidance System” has the somewhat ludicrous side of the “mechanistic” philosophy dear to the Anglo-Saxon, not just to the US, and if the “Essential Silent Partner” seemed both to correspond, with unusual names, to the Holy Spirit that I necessarily frequent as everyone, I had to surrender to the obvious: Anthony considers some different things.

We do not have the same values: soul or spirit, feeling or heart?

Already, I do not know where to place his Guide or his Partner, since he says elsewhere that the soul is our “authentic self”, while in my case, and this agrees with public revelations from “above”, the soul is something we should leave to quietly animate the body and not to play with automations that were never provided for that. Obviously this is only a way of speaking, as if they were not designed for that, we could not use them at all… I just want to say that by using them, we fall into a trap, the trap of not trusting THAT which made us. So Anthony’s Guide is not mine!

You will find me picky, but as you noticed, I use a language rather accurate without which it is useless to deal with metaphysics at all. Because language is the only way to access and make access to what cannot be shown. And even as a beginner metaphysician in his kindergarten, I know the “nature”, as I said, this is the area of change, while metaphysics is also involved, or more importantly, in what that does not change, which theologians had to call the “supernatural”.

In other words, dealing with metaphysics, there is a choice between that which does not change, the eternity of the spiritual and the divine, and what is “natural” and changes. If I’m free to have a guide, I would rather have one who does not change his mind every 17 days or less! Because if there are more than 21 changes per year, it becomes unbearable. Hey! Relax a little! We talk about serious things, but it is also the biggest game we have access to…

So I would rather choose a supernatural guide, as I have done since the beginning of these papers.

His confusion of the spiritual and psychological is not his exclusivity, I think we can go back to Aristotle with his nous, the universal intellect he demoted down to the human level. And that is why I am puzzled by the other question about the heart to which he opposes the mind, unless it be the spirit, since the word “mind” is ambiguous in English, which helps even more the bungling of the Doctor…

Given his confusion about emotions, I guess he is opposing mind and heart, because his vision of the heart is probably the modern vision: the residence of “feelings”. Not the center of being, as envisaged by the metaphysical view, that is to say, rooted in the principle, the “residence” of the spirit, so to speak, as this expression would “locate” the spirit in the space of the physical universe…

Now feelings are also in the mental realm, since they deal with reasoning, but on much irrational bases than reason itself, which we have already seen what we may think of its rationalism, i.e. making exclusive reference to reason. Sentimentality is even the example that is most often taken to illustrate aberrant behavior… In other words it is not worth opposing feeling and mind besides considering their operating bases.

So it remains to oppose heart to spirit, and here we are very wrong. Because as we have seen, we should not be able to, if the heart is what metaphysics considers. But so if the “heart” is where the spirit “settles”, it obviously does not have much to do with the soul and then Anthony would be right. But this assumes many implausible assumptions about the considerations that we know our dear Doctor has!

Let’s still indicate some of the characteristics he attributes to his “Essential Silent Partner.” It is not possible to disconnect him and he is not limited to what has been learned by us. We find, in fact, two typical elements of the Holy Spirit, to which we can add his silent appearance. And if we did not know the point of view of the doctor on hate purveying religions, we could imagine that he has understood some of it. For there is another characteristic attributed to the Holy Spirit: It is to be the source of “Metaphysical Intuition,” another way of saying that He will “teach us everything we need to know.”

And people from the same culture as Dr. Anthony rely heavily on intuition instead of reasoning. But there are many shades of intuition in the field of nature already. The most frequent comes from the body. And intuition is worth the value of its source. As it is unlikely that our doctor is considering any supernatural source, which follows immediately his considerations, so we are still not out of the sensitive domain.

Intuition as the metaphysician considers it, is obviously called metaphysical intuition and is very far from this sensitive area!

You’ll notice, if not done already, that, left to himself, the speech of Anthony is PERFECTLY consistent!

This is often the case with people who have built a system of thought by paying attention to a logical aspect. This is also characteristic of a system, which metaphysics is not! There is nothing « systematic » in it. But without consideration of the Principle, this assumed logic is just rationalism, and if we add the consideration of the Principle to their system, their mental scaffolding collapses, and it becomes incoherent, the brand of the error as has been mentioned.

This polarization, not to say this sinking, in the sentimental and emotional, is typical of modern Western mentality. We have already noticed that we would struggle to find this kind of slippage in the Gospels as we witness how the Verb encourages the adulterous woman that He has saved from stoning: He ends up, saying “Go, sin no more”. Rather unexpected if He had only pity for the “poor victim”… None of the Eastern peoples wallowed in this boulevard theater… and even in the West, in the Middle Ages, sentimentality was not very practiced. Another witness: the lady in her castle, whose enemies captured her kid, brought him to the bottom of the wall and threatened to kill him. She rolls up her skirt, saying: “I have enough to make others”! Yes, because prudishness was not in order, as if sex and turds were secrets that nobody should know! Prudish puritanism is one of the most grotesque aspects of the typical Western attitude! Which is not a reason for wallowing in them and not seeing anything else…

Why should we free the mind?

The answer is beyond Anthony’s considerations, since it concerns what Sankhya explains. It tells that our mind (Ahankara) is in the flow of causality, buddhi being below and ahankara (us) are “above” the soul and the body. So we are in a “substantial” position in relation to the Divinity, and in an “essential” one in relation to the psychic and body. Referring to another aspect directly related to death as the source of life (we saw it already about the food), i.e. sex, which is not only, necessary in practice, but even indispensable, as, because we have to die, so it takes others to continue to demonstrate the presence of images of God.

In mating, the male plays the role of an essence which translates in thousands of spermatozoids, only one will eventually be used to manifest a baby (such as the principle which few opportunities are manifested, especially at a given time) while this unique essence (like the ovule) for this event is what we call the substance, as we have seen, and therefore the female plays a substantial role.

This remark does not concern only the Sankhya, the Gospels also tell us that we should behave as subject to God, and actively vis-à-vis the “world” that is to say the double domain of soul and body. This is explicit in the case of Mary who accepts that “Your Will be done!” And even the Incarnate Verb: “Thy will, not mine.”

But we must not SUFFER the mental and physical domains!

This is not easy, because they bring us information that we use to drive them. In other words, what we should understand is that we have to limit this aspect to information, and not consider them as lessons, a field reserved to the Holy Spirit.

Again the Gospels (one of the “correspondence courses” distributed by the Spirit) can guide us by pointing out: “Why do men cling so much to what they are sure to lose, and neglect what they will keep forever?” But we easily observe the fascination of the race towards culture and memories, not just mentally trying to see as many things and countries as possible, without realizing we will never be able to see everything, nor collect every collectible, especially with memories crystallized in the form of photos, a craze all the more ridiculous as we are sure that these pictures will not follow us in death, while we can always hope that we will take our memories along…

But this is unlikely to be the case. The basic result of death is that the soul no longer animates the body, and we have seen that the spirit may well dispose of the two since he does that every night… And anyway, if he must continue his journey elsewhere, it is not the memory of the Grand Canyon that will be most useful to serve him… Whereas knowledge of the Principle and the three basic functions (God, the Verb and the Holy Spirit) will always be the basis of where he will go! And the same way we encourage our children to learn what will allow them to survive, the only smart thing to do vis-à-vis another human being is to help him discover the eternal elements which will always be there and already are during this life.

And what if you look a little closer at the mind to understand what Anthony says about it?

Because limiting our “learning” to what the Spirit teaches us, which seems to be what Anthony calls his ESP, requires a much final clearing of our mind that what he imagines.

In other words, we are committed to liberate our mind without fighting because we have seen that hostility was a way of making our own mental prison. Remember: “We become what we oppose.” A variation of: “You become what you fear.” two pieces of information that do not need Anthony’s convoluted justifications since they already logically and even directly jump from the simple fact that to fear or to fight, you have to have something to fear or some opponent. And it seems that our dear Anthony, while he is so polarized on the fact of “manifesting our desires” did not clearly see that what we oppose, or even simply by being afraid of something we already manifest it. Oh sure, he tells us that we must not be afraid, but simply on the basis that this emotion is harmful (negative!), but there is no indication of the fact that fear, like love for Socrates, should be fear of something, and that will be manifested as soon as you consider it. It’s even one of the best examples of the power of manifestation of our thoughts…

So how can we clear the disabling elements of our mind without fighting? And without falling into the destructuring psycholyse of psychologists?

Well, this will be the occasion for a second foray into the real quantum therapy. Next time only, too bad for you…